Sin City: A Dame to Kill For

Sin City: A Dame To Kill For is a star-studded, gorgeous looking film that unfortunately has very little going for it apart from that. Eva Green is a treat as always, but even she can't get this film even close to the first one.

If you're keen on watching Sin City: A Dame To Kill For, there's a good chance you're a fan of Robert Rodriguez's first Sin City, both of which are based on graphic novels by Frank Miller. (Rodriguez shares director credit with Miller because of how he faithfully recreates images from the graphic novels.)

The first one went down as a cult film. It was disruptive, entertaining, and it had those gorgeous high-contrast, black-and-white frames that made it a visual treat. Visually, A Dame To Kill For follows the first. It also still is pulpy and intriguing, but it just doesn't have the same taut writing and execution that made Sin City so much fun. On the contrary, it seems like this one is trying too hard.

It picks up characters and some threads of story from the first film, adds some new characters into the fray, and follows a similar parallel narrative structure as we see the deteriorating morality and abject disregard for law-and-order that we're quite familiar with in the fictional Basin City, popularly called Sin City, because, you know, that name suits it and its residents better. 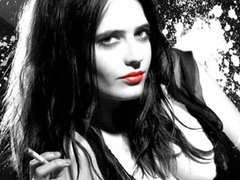 That's just a sanitized way of describing the film, of course - it is all about money, power, sex and crime. (Though you won't get much of number 3 on that list if you watch it on the big screen, thanks to our censor board. There are some pretty blatant cuts, usually accompanied by groans from what seems to be a rather deprived urban audience.)

The most welcome addition to that cast and storyline is Eva Green, who plays a moral-less, cold-hearted schemer who possesses an uncanny power over men, who she uses and tramples over as and when it suits her. Hence the tag line of the film. Green seems to have made a habit out of being the best thing about the sequels she stars in (remember 300: Rise of an Empire?), but she doesn't quite give this film the sting that it deserved.

Though the film is briskly paced, it seems longer than its 100-minute run time because most of the film is narrated by voice-overs of the characters - which pretty much outline the what, when and why of things through philosophical-sounding rants attempting to pass off as story-telling. You want the film to grab at your gut, that's what you expect from Sin City. But it ends up being feeble.

Part of the reason could be the fact that cinema audiences have changed since the first film came out, and there is a lot more exposure and understanding of blurring moral lines today. So obviously, unless this film significantly upped its game in the 'let's shake things up a bit' department, it wouldn't nearly have the same kind of impact as one would have hoped.

The other additions to the cast - Joseph Gordon-Levitt and Josh Brolin - make hay while the darkness shines, but you somehow end up feeling that they were just going through the motions; as does Robert Rodriguez, to be honest.

It still is good fun watching an unrecognizable Mickey Rourke as Marv pounding guys just for the heck of it, or the ladies of Old Town being the deadly rear guard that they revel in being, but the film still just doesn't ever make you feel like you're witnessing something spectacular. As a companion piece to the first, it would make for a fair lazy weekend DVD watch, but that's about it. Besides, you want to watch this film uncut, because let's face it - Sin City isn't quite the same without the sex.

I'm a big fan of Robert Rodriguez, mainly because of his story - the way he chased his passion for cinema despite having next to nothing, and ended up being an A-list Hollywood director. (For cinephiles, his book 'Rebel Without A Crew' is a must read.) Despite having an up-and-down filmography, he always seemed like someone who wanted to push the envelope. His last few films, though, haven't quite seemed that way. Let's hope he gets his act together soon, hopefully in a far more thrilling Sin City 3, in case he plans to make it.

Sin City: A Dame to Kill For - Cast, crew, links