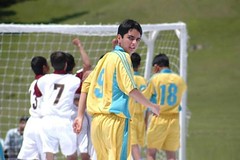 Just like ever-so-beautiful Kashmir gets grimmer as you look deeper into the situation there, the magnificent bird's eye view of the film is marred by the unpolished details. The glowing loopholes distract from the range of interesting, socio-political underlying themes.

Paradise on earth or battlefield? Religion or Politics? Military or militants? Individualism or greater cause? Both, both, both and both. And yes Sikandar deals with all of them. Or at least tries to. Only very deft hands can do justice to the complexities these issues involve without oversimplifying it. And oversimplify this film does. That too with a lot of loopholes. Despite all of this though the film is a decent overall look at what's happening up there because, like it's said, it has its heart in the right place.

Kashmir is in turmoil. We all know that. How many times do we think of the people who live there? People like you and me. What happens to the kids growing up there when they are orphaned - by our soldiers or the jehadis - collateral damage of their cause? What about the collateral damage caused to the psyche of the people living - for whom this is a way of life? How altruistic are the harbingers of peace or the messengers of God?

Piyush Jha, the writer, started with a very nice and acceptable connect-the-dot game. In the overall picture, the dots, all the characters are in place - the common man, the opportunist jehadi, the calculating military, the "impartial" religious leaders, the crookedly ambitious politician and back to the common man. We know the dilemma or the singular aim faced by each one given his/her situation. And you are sensitized or not to their situation. But unfortunately, the links connecting them has way too many breaks, especially as the film progresses. Things are handed in too easily or are completely indigestible.

Yet there are many fascinating facets. The vulnerability and pettiness of the directionless youth and how easily influenced they can be. The tyranny of the people who think they are working for a larger purpose but are doing nothing but serving their personal aspirations. And not just the politicians, all of us, including Sikandar are self-centered and self-preservation is our only goal. Guns belong to soldiers and that's where they should be.

A man denies a girl her tears – does his capacity for cruelty need any more illustration? And even the glaring, on-the-face climax which leaves the future of this beautiful part of the world in the hands of the same youth - who have grown with their experiences in the last few weeks, who might have matured beyond their age due to the situation the adults around put them in.

The problem is other than the overall picture, there isn't much going right in Sikandar. Apart from being full of holes, the story is pretty much predictable. Though it's difficult to say if it was the director's intention to cue the audience in. Because a lot of the acting gives away the ensuing "twist".

Parzaan Dastur playing the lead doesn't seems to have carried on his dialogue delivery style from Kuch Kuch Hota Hai. And Black's Ayesha Kapoor just about manages to convince us of her character, Nasreen. A lot of these issues have to do with the completely off-sync dubbing. I wouldn't be surprised if I were told that the actors didn't dub for themselves. Also, R. Madhavan and Sanjay Suri barely have a role to showcase any of the skills we know they have.

No doubt, this is a low-budget film and needs to be applauded for shooting in Kashmir. I liked the times when the camera moved like a soft wave. But, there surely must have been more ways to capture her beauty than to take touristy shots at dawn and dusk.

I can't but resist thinking, Shankar-Ehsaan-Loy saying, "itna paisa mein itnaich milega" (Channel V Adage, this is all you'll get for the fee you're paying me). Just didn't believe the credits when I saw them. Also, the background music was nice but some-or-the-other tune playing for the full run-time got annoying. It felt like I wanted a time-out to enjoy some Kashmir in peace.

Despite all its shortcomings, I'd still want you to watch Sikandar, maybe no one needs to rush to the theater but a fair watch nevertheless. Just to bring you that one inch closer to the (quoting Madhavan's character, Rao) heaven "man shouldn't have touched" albeit from the safety of our homes.

Thumbs up, by Subhash K Jha, Now Running.com : ...Sadly the reservoir of resonances and echoes gets progressively smothered in the will to create a neat twist at the end of the tale that would work in "A Wednesday... full review

Thumbs up, by Abhijit Mhamunkar, real bollywoood : ...Sikandar is an engrossing fare. There are four major twists in the plot that leave you completely surprised... full review

Thumbs up, by Sonia Chopra, Sify Movies : ...Somak Mukherjee’s cinematography has an enviable subject, no doubt, but his lens brings alive Kashmir’s title of being heaven on earth.... full review

Thumbs up, by Janhvi Patel, StarBoxOffice : ...the confusion and guilt that Sikandar feels is well portrayed.... full review

Thumbs up, by Nikhat Kazmi, Times of India : ...A special mention for debutant Arunoday Singh not just because he easily recognises the make and model of a gun... full review

So-So, by Noyon Jyoti Parasara, AOL INDIA : ...The closeness between Nasleem and Sikandar in a closed Indian society is unreal. ... full review

So-So, Apun Ka Choice : ...A film with a heart but not enough meat to make its story plausible, ‘Sikandar’ suffers primarily because of the loopholes in the story.... full review

So-So, by Khalid Mohamed, aslibaat.com : ...As for Ayesha Kapur of Black, she’s terrific and keeps you riveted, even when the plot ranges from the absurd to the startling. ... full review

So-So, by Minty Tejpal, Mumbai Mirror : ... By the time the film ends, it seems to have lost the serious human interest angle to commercial needs... full review

So-So, by SpiceZee Network, Zee News : ...‘Sikandar’ seems to be just another film set against the backdrop of terrorism in Kashmir. ... full review

Thumbs down, by Baradwaj Rangan, Blogical Conclusion, The New Sunday Express : ...The psychosexual symbolism of a pubescent in possession of one of the most explosive of phallic symbols – and one just about as old as he is – can easily be extrapolated to the discovery of the highs of getting off, and Jha does show that ownership of the weapon transforms the boy into a man.... full review

Thumbs down, by Taran Adarsh, Bollywood Hungama : ...The problem is that the story suddenly moves into the suspense-thriller genre and that robs the film of its originality. ... full review

Thumbs down, by Abhishek Mande, Buzz18 : ...Ayesha Kapoor' performance leaves a lot to be desired. And we've definitely seen much better of Parzaan Dastur... full review

Thumbs down, by Udita Goswami, DNA : ...Parzaan pitches in with the most enthusiastic and sincere performance; Sanjay Suri and R Madhavan serve their purpose as catalysts well;... full review

Thumbs down, by Deepa Garimella, fullhyd.com : ...While the movie tries to be artistic about the impact of kids on civil strife, and vice versa, it is a very contrived attempt, and extremely slow-paced.... full review

Thumbs down, by Kaveree Bamzai, india today : ...It's a strong comment to make and it's a pity Piyush Jha is not a more accomplished storyteller.... full review

Thumbs down, by Jahan Bakshi, Now Running.com : ...while Piyush Jha must be applauded for his brave and topical choice of subject- his film again reinforces the fact that films about children are, in fact, anything but child's play. ... full review

Thumbs down, by Runumi G, Passion for Cinema : ...Sanjay Suri’s performance as a surrendered militant leader with an agenda is quite convincing, while Madhavan does not get much to do in an army colonel’s role.... full review

Thumbs down, by Gohar Iqbal Punn, Radio Sargam : ...The originality disturbs when the film changes paths from being a sensitive saga to a suspense thriller. ... full review

A young, diffident Kashmiri lad, Sikandar (Parzaan Dastur) faces the usual growing-up problems - Being bossed over by the brats in school. And one day he finds an unusual power at his disposal. The lure of the fear created in the enemy because of the power goes out of control.