A Physics graduate by accident, I always tried my best to evade Math (Geometry in particular). Memorising mathematical concepts surpassed the significance of understanding them, just like Vivek Wagh’s debut feature. Remember a common, exam-time state – wherein you start writing an answer quite excitedly but forget it in between or entirely? Something similar happens with Siddhant as it takes the easy way out. It indeed displays what it is capable of or at least the intensity of the underlying subject in its opening minutes. It doesn’t advance however and instead fumbles in reaching a conclusion.

A Math super-enthusiast, Vikram Gokhale essays an idealistic grandfather. Almost all characters he plays has a shade of a principled, idealistic person. More often than not, you would find him enforcing his principles or dreams on someone This time around, he wants his grandson to become one of the greatest mathematicians in the world. Every object in this world has some sort of geometric connection, he conveys relentlessly. Math also happens to be his only ray of hope, except for the regular dose of Rajinikanth films.

Now that his character is established and its possible consequences are anticipated, little is left to be unravelled, right? Well; the film still manages to surprise you, despite being predictably flawed for the most part. Gokhale’s indulgence with Mathematics, for that matter, is so intense that his hatred or liking for other subjects remains unspecified. Seemingly trivial, it actually results in a facile drama you barely care for. 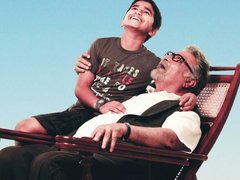 Emotions don’t seem to bother this film’s characters. But whenever they do, the story follows a little melodramatic tone; and doesn’t affect you at all. Also, you are made to face conflicts that lack depth or connect. The background sound and music do their bit to heighten the impact, but you also need visual power to balance the equation. The film lingers for an hour or so to build the situation, and it gets sluggish until you lose your interest entirely. The lone aim of dialogue appears to be instructive rather than being intriguing. Add to this poor sub-plots that divert your attention from the main theme.

Even though a lot of maths goes behind the making of a film, it alone can’t help it survive.It needs the backing of strong words and direction. Several, real-life issues Siddhant depicts and solutions it chooses to offer bear no valid point. Beyond the story-driven mathematics, the film brags too much about its impact in our everyday life. There is nothing much to take away other than the subject itself. As far as the technical value is concerned, poor dubbing, unfounded camerawork or even abrupt cuts bother you from the very beginning.

Archit Devadhar is on the brink of being typecast as a baffled teenager. Those who've seen Killa will agree.. He is a charming kid, whose true potential is barely evident in Siddhant. Yet, you might bump into your teenage self (especially 10th class) in his character.

Notwithstanding the ingenious concept; the film not only fails to add texture to the plot, but it also forgets to grip you along. It is neither a theatrical play (it is inspired by a one-act play) nor a new-age art house film.