An anthology of eights shorts made under an initiative by Humaara Movie and PVR, Shuruaat Ka Interval showcases the work of eight brave filmmakers who’ve made the films that they wanted to make, without the pressure of the dreaded return on investment. That makes the film one of the most honest big screen experiences in recent times.

The one thought that subconsciously remains with you through all of the eight short films in Shuruaat Ka Interval, and which manifests itself into the biggest takeaway from the experience as a whole, is the fact that none of the films were made under the burden of commercial expectations.

Each of the filmmakers made the film that they wanted to make. Some of them feel a little raw, yes, and some of them seemed to exist more in minds of the director than as an engaging experience for an audience who doesn’t know what is in the filmmaker’s mind. Yet, all eight films are perhaps the most honest pieces of filmmaking that you can expect from Indian filmmakers this year. Themed around the word ‘interval’, each filmmaker interpreted it in their own way, and each of them has come up with starkly different interpretations of the theme.

My personal favourite from the anthology was Final Interval, directed by Aarti Bagdi, which is about a person who is the pillar of a family. Despite the film’s rather weak performances, it had a very interesting multi-threaded narrative that all came together for a gut-wrenching finish. 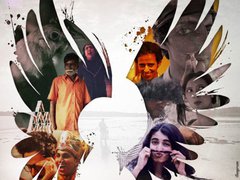 Another beautiful, somber experience was The Gatekeeper, directed by Atanu Mukherjee. Largely a single character film about a person who mans a railway crossing, the film is beautifully shot, and moves you with the sheer melancholy of the protagonist’s life, but also makes you wonder about what it would take to live years and years of the kind of life the gatekeeper lives.

Yet another haunting single character piece is Shishir Jha’s August, which is basically a question on what constitutes right and wrong. Treated in black-and-white, the film is staid and decently performed, but it often seemed like it deserved a little more exposition, though that is a choice that one can’t fault with.

A close second favourite for me was Ayan, directed by Amrit Raj Gupta. Perhaps the best acted film amongst the lot, the film takes us backstage at a theatrical performance of Ramayan, where the man playing Ram disappears, leaving the remaining actors and director in the lurch. Hilarious and spontaneous, with rat-a-tat dialogue delivery and some really fine acting, Ayan is genuine fun. Also, being one of only two films from the anthology that can be slotted as true comedies, this one is likely to be the most memorable film of the lot.

The other comedy, Interval 3D by Palash Vaswani, has an interesting premise. In the middle of a show of a B-grade horror film, a character from the film gets thrown out from the film and enters the real world, where he meets the audience. This highly intriguing premise, though, is let down by some weak attempts at comedy. Also, the film has been colour-graded far too much – possibly to give it the unreal feel that the plot demands; but it seems far too inorganic, for want of a better word.

Krishan Hooda’s The Last Audition is more dark comedy than anything else, but it masks the tragedy that the life of a struggling actor in Bombay is. People have only heard about ‘struggling actors’, but if you visit Bombay and silently observe the thousands of auditions that take place on any given day here, you realize that it is perhaps the most heart-breaking life a person can lead. Beautifully acted by the protagonist, The Last Audition is the most rooted film of the lot.

The only film from the set that I found a tad too indulgent in terms of the narrative was Ankit Tripathi’s No Exit. The film has an interesting idea at its core – that of memories being the bane of one’s existence – but it follows a jagged structure that just doesn’t work for the kind of film it aspires to be. It was the one film of the lot that did absolutely nothing for me.

Perhaps the most daring, layered and assured film from the anthology is Rukshana Tabassum’s Bubbles and Stars. Confusing and beautiful in equal measure, it is – to use a word from the film itself – about ‘randomness’. In the interval of a play, the characters (not the actors,) live a little life of their own. Steady black-and-white images that gel well with the interaction between the two zany characters, the film strangely reminded me of a highly sanitized, 50s version of Q’s Tasher Desh – though this is probably a highly personal feeling. The film will probably need multiple viewings to thoroughly absorb, but it quite simply was the most intriguing film of the lot.

Shuruaat Ka Interval is an inspiration for aspiring filmmakers, and it is a refreshing change for an audience that hasn’t been served genuinely honest cinema in what seems like decades. Hopefully, the film will usher in a trend of more theatrical releases for shorts, which can only mean good things for Indian cinema.

Note: The ratings given are for the entire experience of the eight short films as an anthology, and will obviously not accurately convey rating of each individual film.