wogma rating: Even the keen, wait for it to come on TV/online (?)

In its attempt to keep things light, the film becomes loud and meanders. In its attempt to make a point, it breaks into spurts of short speeches. In the one aspect, it wants to create awareness about, it doesn’t go beyond a couple of wisecracks.

What a brand Ayushman Khurana has created! Without batting an eye, even if you were woken up from deep sleep, if someone described the trailer to you, you’d know he’s playing one of the leads, right? The trailer also seems to take mainstream cinema a few steps beyond. While the film is firmly centred around homosexuality of its lead pair, it doesn’t shy away from making it a sex comedy. Now, whether it will be one that will make you laugh or cringe, is yet to be seen.

Other than that of course, the trailer seems to be controlling itself from bursting into a full-blown preachy monologue about the taboo against homosexuality. And when it is not that, it looks like it will replicate dinner table conversations about being gay. Really hoping it will cross these boundaries too.

The two things Shubh Mangal Zyaada Saavdhan seems to shoot for is to express the romance between a homosexual couple and to fight against the taboo against homosexuality. On the first count, it doesn’t work too hard on the couple’s chemistry, expecting us to be satisfied with a couple of kisses and a few cheesy lines. On the second count, it doesn’t go beyond skin-deep education about the ‘science’ of homosexuality. In any case, can an audience be bothered with the latter, if it is not invested in the first? Of course, the attempt itself is still brave, and there are a few good laughs in there.

In its aim to explain homosexuality to the audience, it comes across as reading out Wikipedia entries.

The film keeps its telling light through the film. There aren’t too many laugh-out-loud moments, but there are bits that make your smile linger. However, the rest of the time, the movie is either loud and dramatic or is outright slapsticky. Given that the intention is to stick to the 90s love-stories format, some of the theatrics can be called a tribute. But, it gets tiring when the movie isn’t moving forward. It stays about convincing one of the families—from beginning to end.

The movie begins with this couple. They are already in love. The only reason we know this is that they say so, and show so through their passionate kisses. But, that isn’t enough to convince us of their love story. Aman’s (Jitendra Kumar) struggle between his family and love lacks introspection. Without that depth, Kartik’s (Ayushman Khurana) fight for Aman’s love seems lop-sided.

Of course, given any couple and a situation, one person takes on the responsibility of empowering the other. Here, except for the couple of times, Aman has had enough, it is largely Kartik’s effort. This kept me from rooting for the lead couple. I do hope this wasn’t because Ayushman Khurana is the star here.

The actors aren’t challenged at all. Right from Gajraj Rao to Neena Gupta to Manurish Chadha to Sunita Rajwar, and even Ayushman Khurana and Jitendra—none of them has to do anything extraordinary. Maanvi Gagroo is the only one that stands out owing to the spunk she adds to her half-written character. 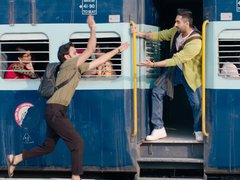 Interestingly her character (Goggle) is the only that the writers seemed to have engaged with more than superficially. Her character is used to shine a sarcastic light on...something. The film isn’t entirely clear about it, but the fact that it wants to say something through her. It could be the treatment of the girl child in a family with sons. It could be how she manages to develop a personality of her own despite the shoddy treatment. It could be that a woman can develop a strong personality even though she is disregarded by the others in a joint family if her parents don’t do the same. It could be that this second-class treatment allows the family to be sure that she will take care of herself. It could be the importance of “getting married” even the girl/individual(?) is perfectly capable of being happy by herself. There is something about this character that the film wants to use but does so half-heartedly. Because the focus is supposed to be elsewhere—on homosexual relationships.

The rest of the cast holds a couple of expressions each. Mostly because the writers give their characters only that much of a personality. Including the lead couple. Thankfully, the characters stay consistent and don’t have unbelievable turn-of-hearts.

Of course, the attempt itself is still brave, and there are a few good laughs in there.

Unfortunately, the main story gets a similar treatment. It is a shame that in its aim to explain homosexuality to the audience, it comes across as reading out Wikipedia entries. Quite literally, from a digital tablet no less. Instead of offering insight into a homosexual person’s feelings about their sexuality and their relationship with their partner. The little it does on that front is skimming over the emotions—to do the bare minimum, lest it becomes too serious.

While I appreciate the choice of keeping things light. But a speech given in a lighter vein is still a speech. And if only all speeches were convincing.

Wasn't DOSTANA like, 12 years ago? They're just getting around to this now...?

Or have we been watching the wrong kind of movies? Which is entirely possible, I realize.

PS: Sorry I haven't been around in a while - with everyone headed off in all directions, we haven't been having our normal Indian Movie Nights... :(

TimELiebe has given this movie a Want to Watch(More Like "Mildly Curious About" -- I await your review, Meeta). TimELiebe has posted 434 comments and has rated 179 movies. See TimELiebe's page for more details.
meeta

Dostana was still slapsticky. This one looks like it will be a slightly more mature take.