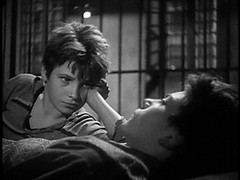 Winner of the first ever Oscar for Best Foreign Language Film, Shoeshine is a gut-wrenching tale of two innocent, young boys who polish shoes for a living and thanks to a series of unfortunate events, are sent to juvenile prison. From Vittoria De Sica, the director of The Bicycle Thieves, this neo-realistic masterpiece will make you upset and sad, but that’s how you feel after watching films in this genre. Not recommended, if you want to be entertained, but certainly a great documentation of Italian kids to learn from.

The great Orson Welles (Citizen Kane) once famously remarked about Vittorio De Sica’s Shoeshine, “It was as if the camera disappeared, the screen disappeared. It was just life (unfolding in front of the audience).”

You certainly get that feeling while watching Shoeshine, now considered one of the first cinematic gems to pioneer the neo-realism movement in films.

Neo-realism, we learnt in college, is where an individual is a victim of the system, and although he tries to revolt against it and find a way around it, he hits a roadblock and becomes desperate and is eventually nailed down. My first brush with neo-realism was in The Bicycle Thieves, a film that I slept through the first time I saw it, but on second viewing I liked it so much, I became a De Sica fan for life. That’s what made me look up Shoeshine and his other films. One may say that majboori ka doosra naam Vittorio De Sica, because he was one of those rare film-makers who captured the desperation of the helpless and unemployed in heart wrenching stories.

Shoeshine (Ragazzi) revolves around two young boys - Pasquale Maggi (Franco Interlenghi) and Guiseppe Fillipucci (Rinaldo Smordoni) - who shine shoes for a living and have collected just about enough money to buy a horse. However, a series of unfortunate events lands them in juvenile prison, where circumstances not only separate them, but also pit them against each other.

It’s a touching story of the consequences of war and how the innocence of children is its first casualty. It’s a theme that even Iranian film-maker Bahman Ghobadi’s touched upon in Turtles Can Fly. Shoeshine however uses a much more mature brush to depict how unsuspecting kids become pawns in a larger criminal set-up and how this accentuates violence in their lives.

De Sica doesn’t show these things in the Madhur Bhandarkar way - there’s no sensationalism about things - as Orson Welles puts it - you simply see life in a prison unfolding. Personally, I’m a sucker for prison dramas (The Shawshank Redemption being my favourite film, ever) and although Shoeshinedoesn’t make any startling revelations about life behind bars, it certainly showcases mundane as mundane should be.

What makes it all look so convincing is some fantastic direction by De Sica to a cast of non-actors, a strategy he’s adopted earlier in The Bicycle Thieves. It makes you sympathise a lot more easily with the tears that a character sheds, laugh with them at the dark humour and feel upset about the way things finally turn out.

Shoeshine wasn’t a commercial success - I doubt if neo-realistic films ever make a profit, but their social documentation is impeccable and they make a profound statement about society, its evils and its victims. Jaane Bhi Do Yaaron, another neo-realistic masterpiece for example, wasn’t a box-office hit. But like all other films in its genre, it attained cult status over the years.

The film, however did win the first ever Oscar for Best Foreign Language Film and went on to inspire many reforms in the way post-war Italy treated its children.

That’s a reason enough to celebrate this film.