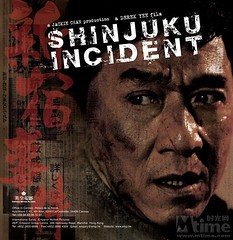 Jackie Chan does a complete volte face with respect to his screen persona in a movie that fails to lift itself above the ordinary.

Well, well, I never thought I would live to see the day. Jackie Chan has a lead role in a film and does not indulge in any comedy or Kung fu either? Surprise, surprise, it looks like Mr Chan at the fag end of his career wants to be known as an artiste with acting ability instead of being just a kung fu clown!

The Shinjuku incident is a drama about illegal Chinese immigrants. The theme about Chinese immigrants and their struggle is a familiar one in Hong Kong cinema; remember Return of the Dragon, and the much more fiery Fist of Fury, both starring the Kung Fu legend Bruce Lee? In both these films, Lee arrives to help out his fellow Chinese; in the first one as they struggle to run a restaurant in Rome and in the second as they come into conflict with the Japanese. Both these films were out and out action films, and Fist of Fury, is possibly Bruce Lee’s greatest film, showcasing his coiled body and lightning fast martial arts moves.

Jackie Chan is all subdued and droopy in Shinjuku incident; he adopts a despondent and woebegone persona throughout and rarely smiles. His performance is just above average, one gets slightly tired of his despair, and in the climax he indulges in a lot of shouting, which does not go down too well.

The first half of the film tries to set up the main characters, but unfortunately barring one or two, none of them are fleshed out well. We remember only the Japanese cop, Inspector Kitano, and Jie. The screen play tries to weave in too many elements about the immigrants’ lives; their desperation and their struggle for money, as well as the threats and challenges that they face. Somehow it does not come together cleanly, it seems a bit forced and artificial. The first half of the film also feels quite incongruous; maybe it is because we need time to adjust to Jackie Chan in his different role, or possibly it is because the frames are bright, clean, and plastic, even when what is sought to be portrayed is the grime and dirt of the city’s mean streets. The intercutting of the present with a bucolic past could also be another factor. The dubbed dialogue in English does not help either.

The film picks up after it has dispensed with all the initial relationship building; we sense that the director is far more comfortable once the film enters crime territory. The story then moves along with quite a brisk pace, detailing the machinations and power play that ensue. The transition of Jackie Chan’s character is dealt with in a few sequences, and is not really completely believable. A love interest is also present and in what seems to be a remarkable coincidence, Bingbing Fan who plays Lily, seems to resemble Nora Miao (Bruce Lee’s heroine in all three of his Hong Kong films). The climax is the film’s strength, shot in low light and grainy frames (possibly to serve as a contrast to what came earlier), it is violent, brutal, and poignant. Swords are thrust through throats, knives used casually to sever and stab, and stones bludgeon and kill.

Brian De Palma’s Scar Face was all about the immigrants’ distortion of the American dream; this film has neither the intensity nor the performances to grip you viscerally and make you lament the tragic hero. It tries hard, but instead remains just average. It is worth a watch though, simply for Jackie Chan’s attempt to go “serious”.

PS And is this Jackie Chan’s first sex scene or what? Blink and you will miss it!

A group of illegal Chinese immigrants struggle to survive in Japan and come into conflict with local crime lords.