The charm that Rishi Kapoor brings to a character is the only draw, and of course, that it was his last film. The rest is everyone struggling with the issue of generation gap, including the writers.

If I ever think of the film, the first thing that will come to mind is the transitions between Rishi Kapoor and Paresh Rawal. The next thing I will recall is the ambience of an urban, upper-middle-class Indian household. Other than that, though, nothing about the story, situations or characters stand out enough to stay in long-term memory.

Ranbir Kapoor does an excellent job of taking the audience into confidence. A crisp explanation of having Paresh Rawal fill in for Rishi Kapoor in scenes that he couldn’t finish gets you curious. Yet, I was a little sceptical, to begin with. Despite the makers’ best efforts and intent, I wasn’t sure how it would work out.

Indeed, in the beginning, it did feel like the audience was being asked to “adjust a bit”. Like we were being told, “we know you understand.” Remarkably, though, soon enough, you get used to the transitions. Of course, some of them are well-executed, and most of them are not jarring. I also think it does help that the human mind when in a pliable mode, has immense capacity to get accustomed to whatever it is asked to consider the norm.

The transitions were also made easier to digest because of the consistency in the atmosphere created—the production design and how the characters look, talk and behave. The small details, from the ubiquitous use of a mosquito racket to a mobile holder, stuck to the windshield of a car—such details tell you the background of the characters without saying a word.

The judgmental attitude of the people who are slightly above this economic class—whether they think the other is cute or snicker at the behaviour—doesn’t let you forget that there is a certain divide and that the two classes are trying to make sense of each other’s worlds. 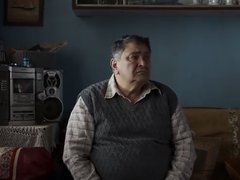 The rest of the film, though, feels dry. Sure the not-so-subtle political digs, the sibling banter, and the day-to-day language keep you listening. But that isn’t enough to add zing to the film’s premise. Ultimately, each viewer is living at some point in the generation gap spectrum.

If you are in or past the late-50s, you feel outdated, irrelevant, and bored. And you have picked either the grumpy side or the “I will live life fully” side. If you are on the younger side, you know you have to spend time on things that don’t seem to interest you. Some are managing unsatiable expectations too. And you have either chosen to understand or be exasperated. Of course, it is not binary, but we know what this is because we are living it. This is why it doesn’t seem interesting, even though the film doesn’t exaggerate or stereotype anything à la Baghbaan.

it does help that the human mind, when in a pliable mode, has immense capacity to get accustomed to whatever it is asked to consider the norm

Even though Sharmaji Namkeen, the film tries to take both sides and presents everyone’s frustrations. It even shows the juxtaposition of the parent-child relationship when the child grows up to parent the parent. Unfortunately, the child who has a “why don’t you just stay quiet and do what I want you to do” gets a louder voice, thus making the movie annoying. I understand the world has enough children who are embarrassed by their parent’s behaviour, but that doesn’t make them characters I want to watch on screen. At least, not the way they are written here.

In all this social commentary, though, one thing stood out. Women in a kitty party are discussing the “damned if you do, damned if you don’t” familial attitude towards women—across all ages. That hasn’t changed with generations.

Everything else in the film seems like a hotch-potch of themes being forced together. Thankfully, the cast, lead and supporting Rishi Kapoor’s unflappable, effortless charm don’t allow you to lose interest. Yep, that’s it. Ultimately, it is a film I would recommend only because it is Rishi Kapoor’s last film.