wogma rating: Add to “To Watch” list, watch some day (?) - Unless you are an Amitabh and/or Dhanush fan - then go for it!

A tribute to a baritone, Shamitabh serves well for the voice's fans. Unfortunately, stretches imagination and its length a tad much making it repetitive and tiring.

As much as I look forward to the next Amitabh Bachchan film, a film with his name in the title makes it a turn-off, just like Bol Bachchan did. You wonder what kind of an act in narcissm this is going to turn out to be. But then you watch the trailer and you sigh a sigh of relief.

It turns out the film is not milking the star, Amitabh but is using his very copyright-able baritone. So, this voice is going to be used with a fresh face. When two artists combine to bring about fame, clashes of ego are inevitable and that is what Shamitabh is going to play on. A very interesting premise indeed.

After Raanjhanaa I am certainly looking forward to Dhanush's next film too. Seeing him hold his own in front of a superstar of four decades is charming. That combined with the freshness that Akshara Haasan brings to the mix has piqued my interest for sure.

Music Reviews:
Bollyspice - "I was very disappointed with the soundtrack to Shamitabh."
glamsham – "3.5/5"
Milliblog – a 200 worder! "Trust Balki to take Ilayaraja national again, and how!"
Music Aloud - "7/10"

Once again a Hindi film makes me refer to a Marathi essay I wrote in my ninth standard. After a six-page long journey by the solider in my “Autobiography of a Soldier”, he was abruptly released because the captors got frustrated with his silence, or like my teacher put it, the writer got bored of writing. Shamitabh's second half suffers on similar grounds, more so the climax. In addition to the technical mumbo-jumbo in the first half, even if short, is just too convenient. So, despite an attempt at a storyline different from the routine, a lot of the writing comes across as the writers got bored and had to do some patch job to get from point A to point B. A baritone as wonderful as it is, and performances that keep you interested, make Shamitabh a just about decent watch.

Shamitabh lingers a little too much, and not in the artistic, let-the-audience-take-it-in kind of a way. To the contrary, the extra moments it stays on say Rekha's face when she hears a familiar voice, actually seem to be asking the audience, “Get it? Get it?”In fact, there was a point early in the film, where I was amused by how this old man Amitabh is being disciplined like a child by the twenty-somethings, almost like they were his parents. And lo and behold, there was a scene later in the film, that makes sure you get it.

A few other Bollywood real life references, from Amitabh Bachchan's dislike for the nomenclature Bollywood to a bus conductor rising to stardom, R. Balki sprinkles the film with nods to the industry. It is cute while it lasts, but, like always references like these divert your attention from the film's story to the fact that it is a film. Same goes for product placements, as “justifiable” as they may be, are only blatant. 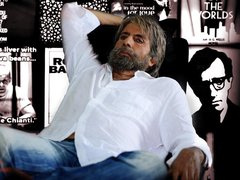 With two struggling actors and a struggling director at the center, it is inevitable that Shamitabh point at at least some things wrong with the industry. From rigged award ceremonies to actors who speak for and against those depending on whether or not they got the award to actors taking control over other aspects of film-making, Shamitabh does its bit.

External references and advertisements aside, techinical glitches and forced writing aside, at its heart Shamitabh is a war of brittle egos. Amitabh Sinha, the old, haggered and cranky failed actor from four decades ago is unsurprisingly wonderfully played by Amitabh Bachchan. It stumps me every time, he comes on screen two things happen – he chews the scene and yet all you can see is the character he is playing, in this case the arrogant, drunkard.

It is commendable indeed that both Dhanush and Akshara Haasan hold their own in his presence. Even so, Dhanush's talent seemed under-explored and Akshara was good when she had to play herself – a young, aspirational, assistant director. The moment she is asked to do something “filmy”, she slips and so does the scene. The guy who plays Amitabh's chaperon has a screen presence of his own too.

Unforunately, the theme of ego clashes between voice and face, man and man, one being incomplete without the other seems like a side. As is evident with what I felt like bringing up first about the film, the things that bothered rather than the concept that is rich by itself but is left unexplored.

While I am a huge fan of the voice and was rapt every time I heard it; while I am a huge fan of the man to an extent that he is one of the few people I think who has earned the right to be arrogant; while I think if there is a personality whose career deserves a film, it is him – I'd like to see it in a documentary or a film that is blatantly about that. Not in a film that is masked as a story about how incomplete the voice is without a face while clearly being overwhelmed by the voice.

Nay! Thumbs Down, by kapil

Just saw the trailer till the end and voila! - Rakesh Jhunjhunwala (RJ) is one of the producers. WOW!! I don't need any other reason to watch this movie. He's my idol. That guy is just awesome. He knows quality. He was talking about investing in movies in one of his interviews. Didn't know, it was this. Let's see if his movie taste is also as awesome as his stock market picks. From the trailer and the cast, it certainly looks so.
About the cast - Dhanush is more talented than any of the A list Bollywood actors, be it Khans or HR or even the younger generation stars like Varun or Ranbir. I am his big fan since Aadukalam. He's in the league of Irrfan Khan, Rajkumar Rao et al. And also we have our very own Amitabh. So casting is top notch.
Regarding the director, Cheeni Kum was a good movie. Haven't seen Paa yet.
For music, we have the great Ilayaraja. Already in love with 'Piddly si baatein' - song and its picturisation.
So, I am going for this movie during the next weekend with high expectations.

Just had a look at the list of directors again. And there is RK Damani also. These two people couldn't stop hedging here also. Lol.
We have two of the biggest stalwarts of Indian stock market, who have been right more number of times in their lives than being wrong. So, going by the probability, this movie is going to be good or may be awesome. And should be hit also.

Correction in the above post. It's the list of producers and not directors. Can't imagine RJ and RK Damani directing a movie :)

kapil has given this movie a Nay! Thumbs Down. kapil has posted 88 comments and has rated 24 movies. See kapil's page for more details.
Anuj

"Dhanush is more talented than any of the A list Bollywood actors, be it Khans or HR or even the younger generation stars like Varun or Ranbir." ~ apt comment from a person who considers Emraan Hashmi to be a legend and Akshay Kumar as world class! Your choices are as laughable as they come.

Anuj has given this movie a Want to Watch. Anuj has posted 1145 comments and has rated 126 movies. See Anuj's page for more details.
kapil

Yes dude. That is the truth. He's indeed talented.

kapil has given this movie a Nay! Thumbs Down. kapil has posted 88 comments and has rated 24 movies. See kapil's page for more details.
Anup

Kapil - Nobody is saying Dhanush is not talented , but ur comparisons are crossing boundaries ..
M afraid one day u can even say Dhanush is better then Big B himself..

Sorry for asking but who are Jhunjhunwala and Damani?

@Meetu: very frequently nowadays whilst trying to access wogma I get an error message that the site is offline. Fyi in case you were unaware.

@Fan oh is it? Thanks for pointing it out. I'll take a look. Meanwhile, can I request you to send me an e-mail at [email protected] when it happens. Completely understand if it is inconvenient. Thank you once again.

@Meetu: will do so i.e. let you know the next time it happens. The error number flagged on the screen is Error 522. In case it helps you.

kapil has given this movie a Nay! Thumbs Down. kapil has posted 88 comments and has rated 24 movies. See kapil's page for more details.
Kapil

Watched this movie on Sunday. Utterly disappointed. Everything was lacking, except acting, which is the only thing saving this movie. And one line which Amitabh's character says in the beginning - "Darte toh wahan hain, jahan marne ka darr hota hai. Iss kabristan main toh sab mare hue hain. Yahan kis baat ka darr". Why was this movie made? Just because R Balki had to made one? Why?
If they want to make a movie on Bollywood, there's so much to explore. Great acting talents are wasted here. Please Dhanush, choose a better movie next time, which can show your acting capabilities to Hindi speaking public, not a trash like this.

kapil has given this movie a Nay! Thumbs Down. kapil has posted 88 comments and has rated 24 movies. See kapil's page for more details.