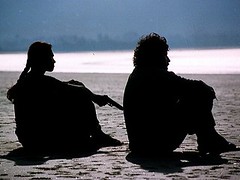 If you get past the delicate-yet-rugged sari-clad woman, stomping around slums shooting people at sight, Shabri is just another underworld/gangster movie. The same old tiff between factions within gangs, the same old fragility between cops and goons. Only difference is a woman gets caught in between all of this for no good reason.

When you are done watching Shabri, you will realize that whatever reason there was to get Shabri (Eesha Koppikhar) involved with the hoodlums was only so that somehow they could get an angry young woman involved.

It's not like there wasn't an interesting conflict. Shabri does get herself in a soup by estranging both the police and the underworld don. And you wonder how she is going to wade out. Even though you are uninvolved, you are curious as any bystander would be. But unfortunately, the resolution is too simplistic and you can only laugh at the cop-out.

And this is a shame because there was so much potential for me to get attached. A woman, whose life isn't enviable as it is, is wronged (for a change it's not rape this once). The hurt only makes her stronger and she uses her anger to change what one might have accepted as destiny.

I think this was a sort-of wasted opportunity for Eesha Koppikhar. Who would've imagined her to be cast in a role like this? But unfortunately she is made to hold just one expression through most of the film. And the rare occasions when she emotes a little more than that with a smirk, you realize she is capable of so much more. On the other hand, for what Shabri is going through, I cannot imagine her having anything other than a dead/blank look. Otherwise, her tan make-up was distracting too. It managed to disguise the glamor that she usually carries, and so did her stride, but somehow all of that looked to artificial, too put-on for the sake of the camera.

Thumbs up, by Nandita Dutta, DearCinema : ...Shabri does not rely too much on dialogues and is slick and crisp, especially in the first half. ... full review

Thumbs up, by Karan Anshuman, Mumbai Mirror : ...Shabri is nothing short of a minor masterpiece in comparison to options you have this week and is the one you should watch.... full review

Thumbs up, by Mansha Rastogi, Now Running.com : ...Eesha Koppikar has all the rights to be gung-ho about this film for she deserves to be lauded for her stupendous performance as the rugged, cuss hurling, hard-hitting, gun-totting slum woman... full review

Thumbs up, The Friday Freak : ...Shabri is directed very well, and the dank, blunt colors give the movie a life of itself. ... full review

Thumbs up, by Nikhat Kazmi, Times of India : ...The novelty of the film lies in it's narrative style, the stark black and white canvas and the gritty, realistic performances by the ensemble cast.... full review

Thumbs up, by Reel Reptile, Upper Stall : ...Technically competent otherwise, the film is bolstered by top-notch performances from the leads... full review

So-So, by Ameetbhuvan, Desi Martini : ...a film that is at the least half as gripping and sincere as Satya or Company. ... full review

So-So, by Martin D'Souza, Glamsham.com : ...Having said that, he lacks the punch in the second half where the film tends to veer off course, thanks to the character of Zakir Hussain.... full review

So-So, by Swati Chatterjee, Gomolo.in : ...The film fails to cash on on the good start it got. After the second half submission sets in. As a viewer, Shabri ends too early for me, half empty. ... full review

So-So, Movie Talkies : ...Pradeep Rawat as Rajdhar is one dimensional-the kind of gangster who snarls at everyone around him and rules his gang with an iron fist.... full review

Thumbs down, by Taran Adarsh, Bollywood Hungama : ...SHABRI comes too late in the day. Sure, it holds your attention in parts, but there's no novelty whatsoever in its plot. ... full review

Thumbs down, Daily Bhaskar : ...you won’t miss much, if you are planning to give it a miss.... full review

Thumbs down, by Mayank Shekhar, Hindustan Times : ...Audiences won't find anything new in this movie either. Why bother.... full review

Thumbs down, by Komal Nahta, koimoi : ...Watch it for Eesha’s performance.... full review

Thumbs down, by Shubha Shetty-Saha, MiD DAY : ...Koppikar as the tormented but gritty Shabri makes a good attempt. But her desperate effort to look plain and ugly shows.... full review

Thumbs down, by Sukanya Verma, Rediff : ... The dialogues, too, mirror this very discrepancy in the script shifting between pedestrian (Dhaap mat) to filmi (Khuda banna chahta hai).... full review