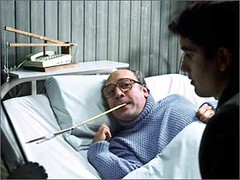 By far the biggest inspiration for Sanjay Leela Bhansali’s Guzaarish , The Sea Inside beautifully breathes life into death and the deep desire for it. Most importantly, it does so in a believable manner. Javier Bardem gives the performance of a lifetime, wonderfully helmed by director Alejandro Amenabar (The Others). A tear jerker that treads the fine line between drama and melodrama, with utmost maturity. Winner of the Best Foreign Language Film at the 2004 Oscars, Golden Globes and the Venice Film Festival.

There is a sequence in The Sea Inside, where Ramon Sampedro (Javier Bardem), a quadriplegic for 30 years, is driven to court. Ramon has been fighting to legalize death by euthanasia, beginning with his own, much against his family's wishes.

During that drive, he sees some everyday, routine sights from the window of his vehicle - a mother beating up her child, a man cycling his way up along the countryside, and so on Beautifully shot, the sequence is a fantastic recollection of his life's journey, his victories, his liberties, his failures and unfulfilled desires. It's one of the most memorable visuals The Sea Inside.

The Sea Inside's settings are believable, and the relationships between the characters are richly layered, thanks to an ably chosen supporting cast who form Ramon's support system.

The depth of their relationships, even as they go about doing their regular chores is depicted with much maturity. New characters appear - another quadriplegic, for example, who disturbs the family equilibrium temporarily - but it only re-affirms their love and faith towards Ramon, despite him being a burden on them.

There's love and of different kinds. The relationship of Sampedro with Julia (Belen Rueda), a lawyer with a heart disease, fighting for Sampedro's cause, is a stark contrast to that of Rosa (Lola Duenas), a lonely single mother, who on seeing Sampedro's interview on television, is drawn towards him, and tries to convince him to continue living.

The drama between the characters is never overstated (Rosa's unwillingness to see Julia with Sampedro, for example). Despite Sampedro's condition, his personality and the sexual undercurrents in Julia's company are handled extremely well. (A scene where Julia is helping Sampedro smoke a cigarrette, is stunningly shot). A dinner scene between the family members and a quiet Ramon lying on bed upstairs, show his isolation from the rest of the world, in strong contrasting visuals.

There are few directors who can ably hold a film so well in various departments - Amenabar is not only the director, but also the writer, editor and music composer for the film. The film is often lyrical, almost poetic in the manner in which Ramon's thoughts blur all lines between reality and fantasy. Despite his immobility, he is able to move the lives of several others. Despite him having loved and lost, he wants to be loved again and his true lover is someone, who would help his cause i.e. relieve him of his condition.

One of the common traits of great cinema is that by the time the credits roll, you feel richer - in emotion, in thought, in quotable lines. This film has plenty of them. At its core, the film makes the viewer attempt one simple question, "If you love someone deeply, would you help him/her die when in pain?"

Interestingly, the film's subject of euthanasia is similar to Million Dollar Baby, which won the Best Picture in the same year as The Sea Inside. I've seen both, but I enjoy some sort of magic in a film’s story-telling, something which transports the viewer much beyond the confines of his seat. In my view, Amenabar succeeds in doing that much better than Clint Eastwood. I'm also sucker for drama and tragedy, and I hunt down DVDs of tear-jerkers with the passion of a Nazi hunting a Jew.

Overall, The Sea Inside is cinematographic achievement from Spain, a country earlier known best for Pedro Almodovar (Broken Embraces, All About My Mother, Volver), but now, thanks to Amenabar, is exporting a new accomplished product.

The Sea Inside - Cast, crew, links

This is a very inspiring movie and definitely worth a watch