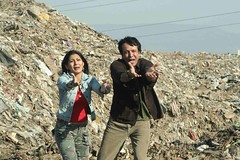 A movie long chase sequence that actually goes in circles. Very engrossing at first and then gets tiring as there's no new plot point to ponder over.

Sankat City - a metropolitan that's a metaphor for human nature. Each of us has a lot of evil in us but at the core there's goodness. And incidentally it’s the metro and its environment that is known to make us the people we are. And yet the film starts of well and some time after midpoint loses the way, becomes repetitive, and boring. It also becomes a tad too loud. Also spoofing old Hindi films is done too often in the recent past that it doesn't impress.

Some of the directorial decisions are impressive though. They took a huge risk by choosing the grainy texture that gives the feel of a film from the 70s-80s and it worked big time. It makes the film stand out from the glitzy, crisp images we are used to. It fascinated me through to the end of the film.

A montage of interesting, weird characters is weaved together. It is fun to see the way through the labyrinth. Because weird becomes bizarre - yes it's possible. And in a very fun sort-of a way. Unfortunately, stretch it a little too long and you have lost me - which happens here in the last 30-45 minutes.

But there are a few good performers to keep it sailing through. The casting of the lead actors was near perfect. Choose Kay Kay Menon for any role and he works, so no doubts there. Rimi Sen is Hindi films' best lady-crook. She has mastered the smirk, the know-it-all look, and the "Damn! Why do I get confused? I'm a bad girl, why do I have these good-good feelings?" expression. Another impressive performance was that of Dilip Prabhawalkar. Though exaggerated he did come across as the poor old man who needed to be taken care of. I'm a fence-sitter as far as Anupam Kher is concerned. I always look forward to his films but just can't handle it when he goes in the slapsticky mode. And here a huge chunk of his role was slapstick. The rest of the cast were too exaggerated and spoof-Bollywood types for me to enjoy them.

That's the thing with Bollywood-parodies these days. With the intention of reminding us of yesteryears or Bolly's follies, they do exactly the same things that annoy in the actual films. And here's the circle that I'm tiring of. A typical comedy Hindi film is slapstick or a chain of implausible events. A spoof of that will have to be the same - only more exaggerated. So, imagine exaggeration being exaggerated. Doesn’t make me laugh, doesn't make me clap.

Yes, the concept is dark, comic and wacky. Full points to that. I wish it was subtle and retained interest till the end too.

Thumbs up, by Chanda Gohrani, AOL INDIA : ...the story is a winner. And the screenplay compliments it. ... full review

Thumbs up, by Taran Adarsh, Bollywood Hungama : ...It takes time to get a hang of things, but once the characters and their traits are introduced at the very outset, the goings-on become one joyride. ... full review

Thumbs up, by Runumi G, DearCinema : ...Advani has written and executed a film that in its fast-paced narrative talks about a section of people who are there, but invisible to us.... full review

Thumbs up, by Deepa Garimella, fullhyd.com : ...Sankat City has a script that never loses its way, and the endless circle of con jobs keeps you hooked throughout.... full review

Thumbs up, Movie Talkies : ... The gallery of characters in the movie are excellently sketched and very well fleshed out on screen by the cast of actors.... full review

Thumbs up, by Minty Tejpal, Mumbai Mirror : ...By the time Sankat City ends surreally in a gigantic garbage dump, you have literally lost the mad plot, but luckily the journey has been fun.... full review

Thumbs up, by Mayank Shekhar, NDTV : ...The beauty of this fast-paced narrative is how it reveals a new twist every few minutes. ... full review

Thumbs up, by Nikhil V, Passion for Cinema : ...Almost every single hindi film cliché thrown and then turned on its head and so effortlessly and so smartly... full review

Thumbs up, by Sethu Madhavan, Passion for Cinema : ...Enough and more entertaining moments to keep you glued to the screen till the end, the very end.... full review

Thumbs up, by Thani, Passion for Cinema : ...Sankat City has been a difficult viewing experience, in its playing-out, and, the consequence, and on both the occasions... full review

Thumbs up, by Runumi G, Passion for Cinema : ...The film’s characters are set in a milieu somewhat like those in Johnny Gaddar... full review

Thumbs up, by Amodini Sharma, Planet Bollywood : ...This film has a succinct storyline, and by that I mean that Advani, who has also written the film doesn’t waste facts – something very rare in Bollywood.... full review

Thumbs up, by Gohar Iqbal Punn, Radio Sargam : ...The second portion of the flick is brilliant too but lacks somewhere because the flick stagnates and becomes droning for a few moments before the climax arrives.... full review

Thumbs up, by Sampurn, real bollywoood : ...Pankaj Advani’s narrative style is terrific and keeps you engaged throughout. It is good debut by the filmmaker. ... full review

Thumbs up, by Janhvi Patel, StarBoxOffice : ...y Kay shines in his role of quick thinking car thief who is quite a softie. ... full review

Thumbs up, by Nikhat Kazmi, Times of India : ... The film may have a raw look and lack technical finesse, but don't be fooled. For Sankat City is a roller-coaster ride through downtown Mumbai ... full review

Thumbs up, by The ThirdMan, Upper Stall : ...The performances of the enthusiastic ensemble cast is spot on.... full review

So-So, by Jahan Bakshi, Now Running.com : ...It takes time to get used to the slightly jerky camera and sometimes poorly lit frames, but once things get into the flow, it's pretty much smooth sailing till the end, unlike in real life where rough waters await the film. ... full review

So-So, by Joginder Tuteja, Now Running.com : ...While the initial portions of the movie are a cracker, what with a dozen odd characters being introduced, what keeps the wheels moving is the entire 'money' angle... full review

So-So, by Sudhir Nair, Passion for Cinema : ...Undoubtedly he’s an excellent actor, but his one time, KK is overshadowed by the ensemble cast. KK and his Chacha’s act in the beginning of the film was actually getting on my nerves.... full review

So-So, by Raja Sen, Rediff : ...It's a mad little jalebi of events, and if only the actors had played it straight -- save the girl this really is a talented lot -- we would have a gripping, uproarious winner on our hands.... full review

Thumbs down, by Kalos, merinews : ...Wonder what made veteran actor like Anupam Kher zero in on this movie.... full review

Thumbs down, by Sonia Chopra, Sify Movies : ...One of the most annoying aspects of the film is the overdone accent... full review

Guru (Kay Kay Menon), Gogi (Manoj Pahwa), and Pachisia (Yashpal Sharma) owe a loan shark, Faujdaar (Anupam Kher) loads of money for one reason or the other. Guru, Gogi and Pachisia end up with deals to repay Faujdaar.