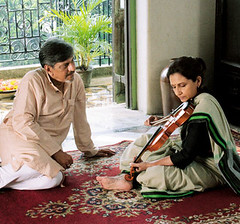 It's always a pleasure to watch the irregular veterans on big screen. They have after all mastered their skill. And they get to use it in a calm ambience too. But unfortunately the narration is flat and leaves you dissatisfied.

Just seeing Amol Palekar and Sharmila Tagore on a hoarding together is enough to make you want to give this one a try. Samaantar is a quite, serene experience. It puts on screen the struggle between a responsible individual and his/her personal aspirations. However, contrary to your expectations, there are no intense debates to match the intense looks on the lead pair's faces on the promo material. A couple of very interesting points are raised about romance and life-death. But, despite the arc in the story the narration seems flat.

One of the huge compromises the story had to make was to justify the lead pair's feelings for each other because of the sacrifices they made in their youth. People, irrespective of age, have a right to love and have their feelings reciprocated. Why did they need a background of huge responsibilities? And despite the forceful filling in of the quiet with backstory, something's missing.

It couldn't be in the acting zone. Sharmila Tagore's quite composition as Shama communicates much more than the verbose Amol Palekar's Keshav. Each perfect in their place. These two get you completely involved. Amazing since the man has come back to acting after 30 years. And the lady is one of the most charming and gracefully aging beauties.

The missing bit could be because of the slow pace of the film, but there are some very unnatural and unexplained transitions in some of the side characters too. Also there's a very dissatisfied feeling at the end of the film. Maybe there was something a lot deeper that could have been conveyed but didn't. Yet, for the really inclined some of the performances might be worth the watch.