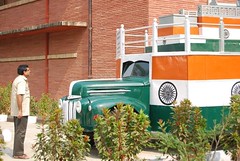 Like the film, the protagonist, Hasmat, sticks to an ideal and to the ethics that HIS religion demands of him. A religion he has defined for himself that he needs to follow and make others follow in his walk towards peace. And they are both preachy.

It's lengthy, it's slow and it's preachy. And yet it's engaging. It's not that you don't lose your patience every once in a while, but there's enough to savor on the screen. And if not that, soon enough, an interesting remark is made or story moves a bit forward in the right direction.

A Muslim protagonist, a common man, an auto-garage owner, a part of the local community association - Hasmat bhai (Paresh Rawal) finds himself struggling what he has always believed his religion was and what he's being told his religion is. He believes in work as his religion, keeping to his commitments as his highest priority - qualities long lost in contemporary India.

After much internal debate he follows his conscience. If it were not for the thoughtfulness and the sincerity with which the thought is put up that marks the film above average and a must watch, if not in the theater, at least on DVD.

Even if the topic doesn't interest you, you might want to catch Road to Sangam just to experience the freshness in Paresh Rawal's ultra-serious performance. A non-caricature, non over-the-top role by him is a gem that can be non-rare but isn't.

Unfortunately that can't be said about, some of the other performances. While Om Puri looks rather stiff, the Maulana twitching his beard and talking in a weird tone and pitch was rather amusing. Also, all the talent that went into writing Hasmat's character was absolutely missing in other characterizations. They were rather feeble and except for a one-odd case transformed without much convincing. In fact, Om Puri's character just disappears at a crucial point in the film and reappears as per writer's convenience.

And yet the concept itself is powerful enough to let go of these glaring loopholes. The entire 2.5 hours length of Road to Sangam plays out as an intelligent drawing room argument. The pace that follows the life-style in any non-metro gives you time to mull. Mull over issues like the partition of India and Pakistan was actually a partition of the Muslims. It toys around with what-ifs with remarks like the savings on defense expenditure had the partition been avoided. That done, what is the need of the hour today?

Another Gandhi as you see Hasmat reincarnated as Bapu himself, as the latter's ashes pour into the holy waters. And Hasmat is just the common man like you and me - it is you and I who need to go on a satyagrah for our fellow-citizens to see what we really need - peace.

Road to Sangam does that for one community. What about fundamenatalists from other religion(s)?

Thumbs up, by Martin D'Souza, Glamsham.com : ...Anger is justified but justifying your stance to be angry is what Rai is portraying on the screen with ROAD TO SANGAM.... full review

Thumbs up, by Mayank Shekhar, Hindustan Times : ...It is noteworthy to watch a Pakistani star (Javed Sheikh) play a part in a picture that questions the creation of Pakistan itself: a fact, if reversed in history, the filmmaker suggests, could save us Rs 11 lakh crore spent so far on defending borders alone. The position is debatable.... full review

Thumbs up, by Susan Jose, India-Forums : ...Road to Sangam can be aptly compared to the khadi cloth that Gandhiji actively promoted. Its simply made. The message that it wants to put through is clear enough.... full review

Thumbs up, by Subhash K Jha, Now Running.com : ...In its effort to project a world beyond strife that is obtainable to a more reasonable humankind than visible in today's divided times, the narrative at times slips into the realm of naive idealism.... full review

Thumbs up, real bollywoood : ...Some may find the film as a glorification of Gandhism, but actually its more about ‘not having’ them rather then ‘getting’ them.... full review

Thumbs up, by Sonia Chopra, Sify Movies : ...So despite the slow start, the film picks up involving you completely.... full review

Thumbs up, by K N Gupta, SmasHits.com : ...This incredible movie full of history and emotion definitely shows up some good acting.... full review

Thumbs up, by Nikhat Kazmi, Times of India : ... Watch the film for Paresh Rawal's retake on his Mumbai Meri Jaan act.... full review

Thumbs up, by filmbear, Upper Stall : ...Good scripts inspire good actors and it's in Road to Sangam this holds truer than ever.... full review

Thumbs up, by SpiceZee Bureau, Zee News : ...if you have veterans like Om Puri and Paresh Rawal sharing screen space in lead roles, the film is bound to be worth a watch. ... full review

So-So, by Taran Adarsh, Bollywood Hungama : ...A simple, thought-provoking story, ROAD TO SANGAM has some brilliant moments and also some sequences that you carry home. ... full review

So-So, by Jaya Biswas, Buzz18 : ...Om Puri is good, but this is certainly not one of his best performances. ... full review

Thumbs down, by Shubhra Gupta, indian express : ...`Road To Sangam’ has a terrific premise. ... full review

Hasmat bhai (Paresh Rawal), a talented mechanic, gets an order to repair an engine from the Indian Government. Meanwhile, his community, due to some dispute or the other has decided to close down shops in protest. Hasmat is torn between his call for duty and the demands of his community.

I think the movie had a nice concept and the actors were also matured enough to get a hit..but unfortunately it didn't worked.