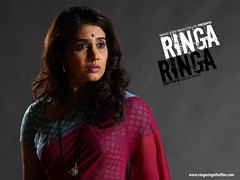 Two not-necessarily entirely connected plots woven together, a little forcibly. But, the core of the film is pretty strong and makes for a decent watch when you are in the mood of a thriller.

There are two story-lines. One involving a politician, his henchmen and agenda. The other is about one of the henchmen and his love wife. Thankfully, there is a connection between these two plots more than the common character. But, somehow, there is a disconnect. It has more to do with the screenplay forgetting one plot for a long duration when the other is on, thus making them obviously feel like two different stories. Yet, the curiosity of the weird, almost surreal events keep you engaged.

The problem with the direction though is that the ambience tilts toward so much surrealism that you kind-of figure out what's going on. Even if it is not exactly what's going to happen, you know the general direction and are just waiting to watch your hunch come right. Fortunately, this is a bit different from outright predictability, because that usually ensues boredom. This does not.

There is also an attempt to stick to the traditional tactics attached to the thriller genre. The music and the stylish use of light and camera angle. Unfortunately, it's only a good attempt. The punch is not to be heard or seen. Though I cannot put a finger on what exactly it is, there is something amiss as far as style is concerned making it look "wannabe".

Then there are caricatured characters. The henchmen have a well-defined but weird trait. Like the guy who hasn't outgrown his nursery rhyme days and likes reciting them before a kill. This, I think is what we saw in The Usual Suspects. Except it doesn't add to the menace of the character, it makes him funny.

Which means a lot is lacking in the acting department. Each actor looks like he/she is trying too hard, including the mystic character played by Sonali Kulkarni. And this attempt at being the caricatured character defined for them becomes extremely distracting.

And yet, the twist in the tale is a decent one. Even a real good one, if you don't see it coming. Meanwhile, a theater trip can be saved for another thriller, another Friday. This one will be alright on TV too.

Just another movie...not so cool!