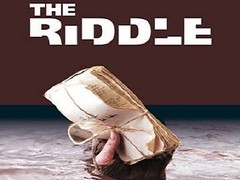 The Riddle is NOT complicated, interesting and exciting. It DOESN’T play with your mind, making you think of the possible subplots and layers to the story and it most certainly is NOT worth your time. Consider this a disclaimer against indulgent, arrogant films that take their craft a little too seriously.

You would think a 7.1 IMDB rating and a cast line-up including Vinne Jones (Lock, Stock and Two Smoking Barrels) is a good enough reason to pick up a film – more so a film about secretive riddles going back to Charles Dickens. When I picked up the DVD of The Riddle I thought to myself, this should be a nail-bitter. My nails are bitten anyway, but that’s because I was bored – and therefore I present to you this disclaimer. Don’t Never judge a book by its cover.

Having said that – let me allow you to get blown away by the synopsis, also the only gripping part of the film. The Riddle is a contemporary mystery thriller that sparks off with a woman’s murder, after she finds an unpublished Charles Dickens manuscript. We see the film through the eyes of Mike (Vinne Jones) who is an aspiring investigative journalist. While he is tracking down the script, we are escalated into the world of yesterday, and only after they unlock the mystery of yesterday, will they be able to solve today’s crime.

Unlike what it seems The Riddle does not have a labyrinthine pace, where everything folds one after another in quick succession. After sitting through the film that sounds positively intelligent, you keep wondering if you’ve missed something, maybe you’re not getting the layers after all. All those thoughts will vanish with the climax. I wouldn’t call it a joke, but after you’ve pulled yourself together for almost 2 hours, you’re hoping all will be redeemed with a revelation in the end – but you get zilch. It’s almost too ridiculous to be true.

The film could have been passable had the writers taken themselves a little less seriously – maybe made a genuine thriller that follows a simple pattern of establishing-churning-revealing. On the other hand, what The Riddle does is get absorbed in its own arrogance, sunken too deep into what they think is a fabulous story.

Vinne Jones is a tad bit wasted, although his acting seems earnest. The look and feel of the film does match up to its era (with the production design and the costumes) with deep blacks and grungy hues. Sadly you’d be able to notice all of this only if you can move past the ghastly play of events that the film has to offer.

And therefore, the writing is the main problem with The Riddle. The crime scenes are fairly played out well, with the sound effects and background score. It could have been a half decent film had the writing been cross-checked at a development stage.

The only extra in the DVD is an extended trailer of the film, which honestly is the best part of the entire DVD. The trailer is crisp, sounds and looks good and has the core concept of the film down to perfection. My humble suggestion would be to remake the film, taking it from the trailer and making it more coherent, tight and mildly entertaining at points. Not because one needs those elements to enjoy a film, but for this plot it’s necessary to carry the add-ons.

It’s a hard task to offer a critique of a film which is fundamentally all wrong. You don’t know how to deconstruct it further and go deep into the layers to offer suggestions. But one of the main reasons why I decided to go this was to bring a crucial point to everyone’s attention. Some bad films should have never been made but there are some films that have interesting concepts and the problem mostly lies with execution. The Riddle belongs to the latter category.

Also, for future reference, please evaluate a film with your own rating.