As a bittersweet slice of life, Ribbon is richly textured with performances, beautifully layered with content, and sprinkled with occasional humor.

As a bittersweet slice of life laid out in front of you, Ribbon is richly textured with performances, beautifully layered with content, and sprinkled with occasional humor. One bite, and you won't feel like leaving it unfinished. It is relishingly engaging.

...the movie made me forget my illness and engrossed me so much that I didn't even turn in my chair.

Kalki Koechlin and Sumeet Vyas play an urban couple, Sahana and Karan, with such conviction that you can almost hear them think. Their kisses, tiffs, and struggle, carry the veracity of a couple's passion, despair and the need to sustain respectively. Their love for each other is palpable. And even though their courtship is not shown, their longstanding devoted relationship is apparent as the very spine of the story.

Of course, there are numerous arguments, as may be evident from the trailer, but what's interesting is that all of them emanate from the larger issue of our conditioning and acceptance of gender roles, priorities, and discrimination thereof. Ribbon thus blends together the personal, the familial and the social milieus, and offers a rather thorough tasting of our times.

Kalki is so good in the role of today's urban woman, who demands equality in personal and professional life, that there are scenes where she easily reminds of yesteryears' Shabana Azmi. The film offers numerous instances where Kalki has proven her acumen without coming across as trained or repetitive. For example, scenes where she is feeling frustrated and defeated, yet struggling to not spoil the moment for those with her at that time, even at the cost of, say, thrusting a handful of French fries in her mouth to depict Sahana's stress coping mechanism. In all the variants of such a moment, you realize how well she has mastered the craft of effortlessly expressing transient emotions.

The good thing is that the entire ensemble cast is hugely, if not equally, talented and fulfill their part with utmost sincerity. As representatives of real-life individuals we are surrounded by, each character in the film is culpable yet unavoidable. They bring in relief as well as new conflicts. Each of them is thus gray, and hence real. The challenge for the more upright ones like Sahana is to find a way to coexist with such people and yet to hold her own. And Kalki makes Sahana do a fantastic job of it. 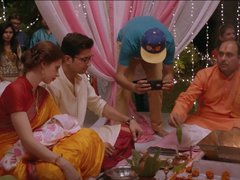 Direction-wise, the use of hand-held camera helps add to the overall realism of the script. Just like it did in Kapoor and Sons (2016), it helps break the fourth wall and plants you within a scene, makes you a part of it. And, that's probably also why the film is so engaging. You are not stationed on a comfy chair but move around the house, and everywhere else, with the characters. The briskness of physical movement helps you relate with a character's state so much more.

The craft of the director is most admirably evident in handling scenes with child actors. Their natural state is utilized well in the script and in their interactions with other actors. Thanks to this, child actors don't look like borrowed props.

Ribbon thus blends together the personal, the familial and the social milieus, and offers a rather thorough tasting of our times.

Then from the editing point of view, the inclusion of details, even if they may momentarily feel unwanted, is commendable and additionally helps paint a pretty real picture. For example, the scene of safety drill at the construction site. Not cutting it out and letting it frame a phone conversation that Karan (Sumeet Vyas) has, is so important in understanding his context and in empathizing with his efforts.

In a nutshell, every cast and crew member seems to be focused on achieving a certain veracity, while keeping you involved. As a result, there is something so sublime about Ribbon's truthfulness that it made me sink in my chair and not blink.

I had pre-booked a seat in an open-air theater but ended up falling terribly sick on the day. So, I prepared myself to walk out in the middle if I didn't find it too comfortable to sit under the sky. However, the movie made me forget my illness and engrossed me so much that I didn't even turn in my chair.

PS: I couldn't pay much attention to the music, but a couple of songs that play in the background seem soothing. And they don't alter the pace of events in the movie. Thus non-intrusive.

Thumbs up, by Subhash K Jha, Bolly Spice : ...Ribbon captures the rhythms of metropolitan life with such a vehement repudiation of drama that I often forgot I was watching fiction. Ribbon has its share of flaws... full review

Thumbs up, by Dev Raj Gulati, Desi Martini : ...All in all Ribbon is one of the better films of the year.Should be seen by young aspiring couples with double incomes. ... full review

Thumbs up, by Kunal Guha, Mumbai Mirror : ...This is the opposite of a feel-good film. What's particularly unsettling is that it refers to a reality that's closer to home, and not borrowed from an occurrence in an isolated Gurgaon highway or a small-town tragedy. ... full review

Thumbs up, Sify Movies : ...Ribbon has its share of flaws. So relentless is the focus on the protagonists' lives that we barely get a glimpse into the lives of the other (interesting but sketchy) characters, like Sahana's friend or Karan's father or the babysitter who evidently leads a life as adventurous as her employers, if not more. ... full review

Thumbs up, by Namrata Joshi, The Hindu : ... Sandilya even wraps it all up with a lovely touch of continuity than a neat closure. Our lives, after all, are in perennial motion.... full review

So-So, by UDITA JHUNJHUNWALA, FirstPost : ...Not all ideas translate well to film and though are some moments of note, if Ribbon works at all, it is credit to Koechlin’s and Vyas’ committed and convincing performances. ... full review

So-So, by Sweta Kaushal, Hindustan Times : ... It is not surprising that most of the dialogues were actually improvised on the sets and the pre-written ones were not used. Kalki and Sumeet imbibed their characters, as is evident from their convincing performance.... full review

So-So, by Umesh Punwani, koimoi : ...At the end of all, Ribbon tries to portray something really bad happening around us. It’s just the sludgy route it takes that bothers throughout. Watch only if you can ignore all of the above flaws. ... full review

So-So, by Saibal Chatterjee, NDTV : ...But not so Kalki Koechlin's star turn. She creates an authentic, pitch-perfect portrait of a career woman who becomes a reluctant mother. Sumeet Vyas is a perfect foil to an actress who digs her teeth deep into one of the meatiest roles that she has ever played on the big screen. For Vyas, Ribbon could prove to be a stepping stone to more such Bollywood openings. ... full review

So-So, by Kriti Tulsiani, News18.com : ...The film doesn't have many dialogues to rest upon, but a few out of ordinary life conversations to catch on. The camerawork seems partly of a documentary and partly of a web series but as a whole, the close-up car shots depict more than just what meets the eye. The vulnerability of a modern-day couple lays bare during those car rides it seems. ... full review

So-So, by Urvi Parikh, Rediff : ...Sumeet puts on a calm act and shows the struggles of a young husband-turned-father well. You empathise with him on many occasions. Despite its relevant premise, Ribbon fails to leave an impact.... full review

So-So, by Nandini Ramnath, Scroll.in : ...One of the most remarkable performances is by the child actor Kierra Soni as Aashi. Soni turns in a completely unselfconscious depiction of a little girl who remains unaware of the crisis that has befallen her and her parents. In a movie about adults, the knee-high Soni proves herself as the ace in the pack. ... full review

So-So, by Pallabi Dey Purkayastha, Times of India : ...All in all, Ribbon starts off with one storyline and ends with another, but fails to capture the gamut of both. Rakhee Sandilya has started a conversation on a less-spoken human emotion, very humanely. If only she had taken one route and explored it to its optimum level. ... full review

So-So, Zee News : ...Ribbon is an intriguing film with a heart and though it does not offer anything out of the ordinary, it compensates for a lot of the predictability. ... full review

Want to Watch, by fanofcfc8

Yay! Thumbs Up, by Akshat Gupta

Yay! Thumbs Up, by raaj

damn yaar...missed this movie..I've been scouting the web and the stores for weeks now for a copy..your review has made me wanna watch it even more.

fanofcfc8 has given this movie a Want to Watch. fanofcfc8 has posted 14 comments and has rated 12 movies. See fanofcfc8's page for more details.
Raaj

What a rating on crap??
Meetu are u pulling down credentials of wogma??

raaj has given this movie a Yay! Thumbs Up. raaj has posted 3 comments and has rated 1 movies. See raaj's page for more details.
meeta

@Raaj Sorry, didn't get you. You have given it a thumbs up too, right?

I haven't seen the film, but I know a few people who loved the film and have been on my case to watch it. Where did you watch it?