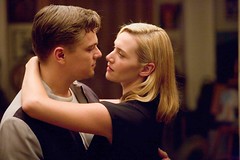 The great Suburban American Dream is completely dismembered. An honest unflinching portrayal of suburban life, depicting the disquiet and ferment that lie at the heart of a relationship.

Nearly a decade after Sam Mendes dissected suburban life in American Beauty; he is back with another intense examination of the same terrain. This time around the story centers on a young couple, the Wheelers, and their relationship. Revolutionary Road wastes no time on romance, but instead kicks off at a point where the young couple is staring at the end of their youth and the beginning of middle age.

The script builds up beautifully; the opening sequence takes care of the romance, the second sequence establishes the nature of the relationship and suggests possible reasons that could jeopardize it, and the third sequence outlines and contrasts their individual lives in the present. It is from the third sequence onwards, that the film takes hold and from then on we just cannot let go. The film draws us in to the world of the Wheelers, their lives, their jobs, their friends, and their aspirations as well as anxieties. Each scene is marvelously set up; tiny details are fleshed out exquisitely, both in the acting, the dialogues, as well as the props used. One has to pay careful attention, as the minutiae are extremely important and provide the context in which the action takes place. The camera work is steady for the most part, except in the final sequences where it changes to hand held; a move which accentuates the air of unreality and disorientation that the characters possibly feel. The final sequence and track in leaves us with an extreme sense of unease.

The acting is top notch, one forgets Dicaprio as a star, and identifies totally with him as Frank Wheeler and nothing else. In his earlier films like The Departed and The Gangs of New York, it was very difficult to go beyond his good looks. Here, his mouth and his eyes combine to turn in a most natural performance. Kate Winslet is superb too, we see her harried, frustrated, loving, hating, and dreaming. The supporting cast seems to be part of the landscape; they blend in so admirably, their acting so nuanced, that one is totally caught up in the illusion. Michael Shannon as John Givings, David Harbour as Shep Campbell, Kathy Bates as Helen Givings, and Dylan Baker as Jack Ordway, not only act, but their roles, however brief, are critical to the story. The background score is stupendous, all muted piano, strings, and synthesizer. The score beautifully accentuates the emotions of the characters and in the climax builds a persistent note of dread and despair.

The film is relentless: it probes every nerve, however painful, scrutinizes myths of love and marriage, sifts through the debris of human hopes and aspirations, and hurtles to an inexorable climax. It is dogged and ferocious at turns. The viewer is pinned to his seat, squirms and is jolted, as he / she sees lie after lie exposed. Sam Mendes has given us a fine film, a film that seems more real than life itself. Where American Beauty suggested hopes of redemption of a kind, Revolutionary Road makes no such promises. It is an uncompromising and unyielding look at a relationship and situates it within the larger context of a society and its mores. The film is not particularly kind to men; it demolishes most of the fables that men have created with respect to work, love, and family. One feels exhausted after watching it, one pauses and hopes against hope that his or her life not be as shown, but alas, one knows better.

The Wheelers are a young American couple who come to live on Revolutionary Road. Their relationship comes under strain as they try to fulfill their dreams and aspirations.

• The two scenes where John Givings played by Michael Shannon visits the Wheelers and speaks the Truth. Both scenes are fabulous: Dicaprio, Winslet and Kathy Bates (as the long suffering mother) are a delight.