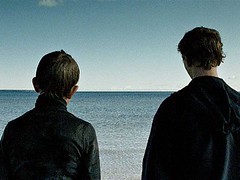 What a debut! Andrei Zvyagintsev’s hypnotic suspense thriller, The Return, is one of the best films to come out of Russia. Eerie, brooding and cheerless, this film kept me guessing like none other. A story about how the lives of two young boys are shattered when their father suddenly re-appears after a period of 12 years, The Return is cold, deep and flows like a calm mist, until it arrives at a climax you’d never have anticipated. Winner of the Golden Lion at Venice International Film Festival, nominee for Best Foreign Language Film at Golden Globes, Academy Awards and for the Golden Leopard at the Locarno Film Festival.

I love cinema that can be discussed like a Maths question paper after coming out of the examination hall. Where participants / viewers can compare mental notes. Questions like “What do you think happened to him?”, “Why did he do that?”, “Where did he come from?” It gives the film the much needed mind-space to exist beyond its stipulated running time.

The Return is a film in a similar genre. By not making details about the central character’s background explicitly clear, director Zvyagintsev heightens the mystery in this thriller to enormous proportions, and solves itself only partially by the end of the film. However, unlike most mysteries, this one has got no scam, murder or robbery connected to it.

Somewhere in Russia, two young boys - Andrei (Vladimir) and Ivan (Ivan) - are shocked to discover one day that their father, who they believed was no more, has suddenly come home. We’re not told where the father (Konstantin) was, all this while. The mother doesn’t explain, nor do the boys get any answers from the man himself. Even as the two of them jump at the idea of an extended fishing trip that the father proposes, they can only hope that they get to know him better.

I haven’t seen a film like this, before. The film is intense, brooding and eerie throughout. You’re left guessing whether the father is a ghost, a dictator or a stranger bent on using the kids to further his own means. Why did he suddenly propose the fishing trip? Where is he taking them? Does he want his boys to turn into men? Why doesn’t he tell them where he was all this while? These are questions that keep crossing your mind throughout. Interestingly, these are the same questions that are troubling the two boys as well and making difficult for them to trust the man completely. If you look deeper, Ivan and Andrei represent two faces of a human mind when faced with a mystery - the former is questioning and rebellious, while the latter more easily accepting of things the way they are.

There are times when you place yourself in the father’s shoes and realise you can’t blame him for the way he is. He’s been absconding for 12 years. He’s not even familiar with the world of his two boys - what are their likes, dislikes. Scenes where he asks Andrei to settle the bill at a restaurant, or shows them how to get the car wheel out of muddy track, or how to punch a guy who robbed the two of their money - all point towards him wanting his sons to stand up on their feet and defend themselves. In a way, you can never fully convince yourself that the father is a villain in the film because everytime you feel so, he tops it up with something that makes him endearing. It heightens the mystery about the back-story of the father.

The irony of the screenplay - and this is the film’s biggest strength which fuels the suspense - is the mood of the three characters during the trip. Here they are, going on a fishing trail through the beautiful countryside. But there’s very little they speak with each other. The photography captures their mood perfectly, lending itself beautifully to the film’s cheerless feel. The director shows a particular fascination for landscapes, especially water, and you’ll know why, when you see the film.

The climax is breathtaking and easily the biggest highlight of the film. The shock, and the character’s reaction to the shock and what follows after, left me with sweaty palms. The closing sequence (a fond tribute to that of The Motorcyle Diaries), seals the films and beautifully, it left me immensely satisfied.

I loved Ivan’s performance in the film. Despite being a child actor, he is the perfect nemesis for his father. Shot mostly through close-ups, he is the most well-written character in the film, after his father. Konstantin fits the role to a T and his tall, lean figure and athletic build point to the character’s history somewhere in military Russia.

I can only imagine what a high it must have been to discover this film at a film festival. The film is made of stuff that can make you smile in satisfaction for the discovery of a fine, new directorial voice from Russia. An outstanding debut, by all measures.

Yay! Thumbs Up, by Hindilyrics4u.co.in : For all Telugu Songs Lyrics Visit: Telugulyrics.co.in

Nay! Thumbs Down, by Get Instagram Likes Fast : Bredebro

A thoroughly engrossing thriller of the mind. The unanswered questions add to the mystique of the film. Brave review! Viewers used to cut-and -dried denouements will probably not like the film.
The boy who played Andrei died in a swimming accident not too long after the film was shot.

Samir has given this movie a Yay! Thumbs Up. Samir has posted 56 comments and has rated 37 movies. See Samir's page for more details.