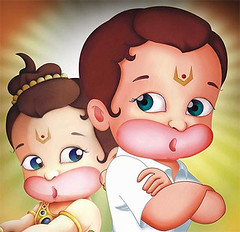 The bits that will entertain kids will not work for adults and vice versa. The concept is novel and there are funny lines, no doubt. But neither of that in enough quantity to keep your attention.

Whatever you do, you shouldn't make a kids' movie that drones and bores. Okay, granted, I am not an authority on what bores kids, especially considering I am not one anymore. But I have a strong feeling this will not work for kids.

First, kids are exposed to much better animation. Cannot fault the makers on this one. Because given the budget constraints, visual creativity has been used to the optimum. But, would kids really care about "value for money"?

Second, for a regular good vs. evil story, this one has too many characters. I am not underestimating the average kids' intellect. It's just that except for 3-4 characters, none of the others are well-established. This doesn't give enough material for kids to love or fear the characters.

Third, all the humorous spoof-like references to hindi movies of the 70s or cricketers or politicians, will be completely lost on kids. So, could that mean that the movie is not for kids? What's in it for the adults, then?

The idea is novel and thus interesting. But, the execution is haphazard and abrupt. The writing too is not the best. Mythology becomes fantasy becomes drama which suddenly becomes an outright preachy social message. And thus no justice is done to any one theme.

The songs are just about average and I couldn't hear the lyrics because the music was way too loud compared to the voices. The music builds-up well but lacks a punch at the end of the songs.

That said, some of the lines and situations are very funny and some of the visualizations very creative. There are a few metaphors too. But overall, it suffers from not having a specific target audience. In its attempt to have something for everybody, it ends up becoming nothing in particular for anybody.

Of course, adults and kids are not mutually exclusive targets as an audience. But, unfortunately, the bits for adults in Return of Hanuman will be enjoyed only by adults and same goes for the parts that kids would enjoy. Thus, overall, it is one of those which you would want the option of multi-tasking with. At home along with work or play and a movie on in the background.

Thumbs up, B4U TV : ...The story and treatment of the character is very fresh and new... full review

Thumbs up, by Baradwaj Rangan, Blogical Conclusion, The New Sunday Express : ...All I could think, in between bouts of giggles, was: “Holy Sacred Cow! They wouldn’t give Paanch a censor certificate, but this they let pass unscathed?”... full review

Thumbs up, by Fatema H Kagalwala, Business of Cinema : ...The movie is not only Kashyap’s take on perceived symbols of mythology but also is a comment on outcomes of modern-day lifestyles, loud and clear.... full review

Thumbs up, by Sindhu G. Murthy, Deccan Herald : ...The comical depiction of the day-to-day activities of the Gods and Goddesses sets you laughing heartily... full review

Thumbs up, by Shubhra Gupta, Express India : ...What it does have in abundance is superb lines, and fun, quirky characters, which make the film come alive... full review

Thumbs up, by Khalid Mohamed, Hindustan Times : ...Inexplicably, the publicity material doesn’t introduce you to the awaaz brigade... full review

Thumbs up, by Gaurav Malani, indiatimes : ... The film works mainly because it attempts to be witty and not wannabish... full review

Thumbs up, by Abhijit Mhamunkar, indya.com : ...The songs are fun to watch with some innovative humor punches added to them... full review

Thumbs up, by Satyajit, SmasHits.com : ...The chirpy talk between Hanuman and Narad is hilarious while the caricatures of Rahu and Ketu are aptly designed.... full review

Thumbs up, by Nikhat Kazmi, Times of India : ... Of course, the final product is a complete kichdi , partly Hollywood, partly Bollywood, shaken and stirred with dribbles of Indian mythology... full review

So-So, Bollyvista.com : ...The film is a little less than two hours, but it still drags!... full review

So-So, by Sundari Venkatraman, Buzz18 : ...The film seems to be crammed with many ideas taking off in different directions... full review

Thumbs down, by Rachel Fernandes, Bollywood Mantra : ...The script often gets confusing as the focus keeps shifting from one issue to the next without really linking the two aspects.... full review

Thumbs down, by Sukanya Verma, Rediff : ...In trying to establish this, the film tries to be a lot of things at once -- enlightening, entertaining, cheeky, cool and comic... full review

The mythological figure, Hanuman, wants to go to earth for a vacation. Soon enough, vacation ends up becoming work because the Gods want his help in resolving a crisis on earth.