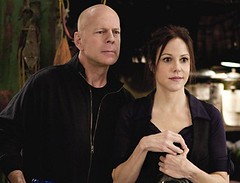 RED stands for Retired and Extremely Dangerous. That's pretty much all the backdrop you're going to need on the lead characters. Though the story is adapted from the three-issue comic book series, it is much more comic than the comics itself. For once the comic is more darker than its movie. By introducing more characters and comic elements, they compromised on the story and made it a character driven film. And it worked. It's a must watch for the sake of the cast. But if you're not that big a fan, you can skip watching it in a theater.

RED stands for Retired and Extremely Dangerous. And Bruce Willis, Morgan Freeman, John Malkovich & Helen Mirren are so “ED”. Though the movie is based on the three-issue comic series by the same name, it has a pop-ish take on it. Since the comic-series didn't have enough content to be translated into a full movie they introduced many new characters and made the movie more comical than the comic-series. The concept of the movie is that a high-up official tries to pull off a conspiracy by taking off the good guys. But the picked the wrong lot to mess with. (Come on, no one messes with Bruce Willis! Even a fifth grader knows that.) The story however takes the back side, as it's the lead actors that shine throughout the film and make the movie-watching experience worth the money.

The movie is very stylish and the action scenes are beautifully shot. I've watched the scene in the promos, where Bruce Willis casually steps out of the moving car, countless number of times, and never got enough of it. The screenplay is average but the performances are very powerful.

Bruce Willis owns the role of Frank Moses. One second he is believable as the gentle giant to Mary-Louise Parker, and the next second he is out there knocking bad guys by the dozen as a highly efficient black-ops agent. Very few actors can come close to Bruce Willis when it comes to pulling off an action film with tongue in cheek dialogues. I for one, am his 'die hard' fan (Pun full-on intended). Morgan Freeman is composed as ever in his somewhat short role.

John Malkovich was the pick of the lot for me. He was brilliant in the role of an eccentric retired agent who suspects everyone and everything. And Helen Mirren. Oh, she still steals the spotlight every time she's on screen - gracious as ever. Mary-Louise Parker did over act her part as Frank Moses' love interest, who is clueless about all the chaos surrounding her life. But knowing her capabilities as an actress, I guess she just made the best of what she was told to do. She had her moments to shine too. Brian Cox has a very interesting role in the film, one with many shades. He too fits in the character effortlessly. Lastly, if you don't recall the name Karl Urban yet (the new Dr. Bones, in the Star Trek franchise), you'll surely be hearing a lot of him in the future. After all, he is going to play THE Judge Dredd in its remake, scheduled to release in 2012. He plays the antagonist and managed to stand his ground pretty well in front of the biggies. Watch out for him.

It's all good in the acting department, so the fault totally lies in the screenplay that fails to keep you excited. The lack of seriousness works for the characters but fails the story. It won't leave you in awe, but you'll enjoy watching it.

After The Expendables and RED, looks like, too many cooks may not be that bad a thing. With these guys gone, it'll be end of an era for action movies. They dictate how action is supposed to be done. Watch it for the cast, as we don't know how long they'll hang around. But there's something to look forward to. Since a prequel to the comic-series has been announced, we just might have a prequel to the movie.

Yay! Thumbs Up, by Aniket Thakkar : They've still got it.

Yay! Thumbs Up, by TimELiebe : Romp-y adventure version of a "serious graphic novel" starring a wonderful cast.Yes for action&fun!

My bad, for forgetting Mr. Dreyfuss. As for the dismissive reviews, I guess they were either expecting too much or expecting something entirely different out of the movie. Like I said, for the sake of the actors, it was fun watching the film for me. I'd first noticed Karl in Bourne Supremacy. He did great there too. (I'm going to ignore Priest)

Thank you for reading the review and taking time to comment.