A sports drama that is hardly the best sports film around yet goes beyond. A social drama that aims to get you involved in the topic, not deeply educated about it. Yet, together makes for a film worth your time and energy. (Available on Zee5)

Rashmi Rocket leaves you with a surge of mixed feelings. You want to admire it for not going the under-dog route, but you cringe at the other typical tropes it gleefully wears on its sleeve. After the problematic first half, you question yourself for being intrigued by the social issue it has taken up. You don’t want to be disappointed just because a court case got you excited, right? But Rashmi Rocket redeems itself by giving a rounded first set of arguments for and against gender testing in athletics.

The film doesn’t stray away from the norm too much but still manages to leave a mark.

It doesn’t intend to educate you about the issue in depth. And I didn’t resent it for that because it goes beyond scratching the surface. For a change, I didn’t mind that femininity was questioned from different angles, including motherhood. That last bit is a double-edged sword. I ended up liking it because the movie goes on to say that it is not enough. In the process, it becomes just a tool to make a point, exposing the lack of finesse in the writing.

Similar awkwardness shows in Rashmi Rocket’s portrayal of its villains. The characters seem forcibly mean. The film’s heart is so much in the right place that the nastiness seems like a means to an end, rather than being an organic part of the story. I guess the writers took their signature dialogue to heart—the process matters, not the end. Though, the contrived insertion of these vile characters does a disservice to the philosophy.

Having said that, not all is wrong with the writing. Rashmi Rocket (Tapsee Pannu) makes an endearing speech to an unexpected audience. The 13-second reminded me of the 70-minute speech from Chak De! India. Also, the overall story and what the film really wants to tell, compensates for the otherwise inconsistent writing. In fact, it has been a while since I enjoyed the second half of a movie much more than the first one.

At the same time, the first half allowed me enough time to wonder about all that was wrong. Tapsee Pannu’s forcibly darkened face was bothersome. Her character’s mom transitioning from conservatively asking her daughter to behave like a daughter to being a leading feminist in the village didn’t seem like a natural change. For the sake of drama, heads turned to notice Rashmi (Tapsee Pannu) was running faster than others, even when she was running by herself—the difference in speed was a little over 1 second for 100 meters. Maybe I am naïve, but the body-shaming that Rashmi was subjected to seemed out of place too. 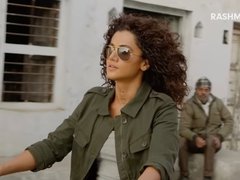 However, even if not the telling, the story allows these follies to dissipate as the film progresses. Usually, when a scene is referenced later in the movie, you can tell that the scene has been positioned so just for the referencing. Rashmi Rocket manages to do a couple of such references slickly. Its comment on provoking jingoism offsets its criminal self-referential dramatics. It even goes a step further and does nationalism as right as it can be done.

It helps that all actors, from Tapsee Pannu to Supriya Pathak to Supriya Pilgaonkar, the cast do what they usually do well. So, there is nothing mind-blowingly different because it isn’t necessary. The ensemble, especially the goofy Abhishek Banerjee and charming Priyanshu Painyuli, add to the comfort brought about by the ladies.

Similar awkwardness shows in Rashmi Rocket’s portrayal of its villains.

Strikingly enough, the film doesn’t stray away from the norm too much but still manages to leave a mark. Just the relatively untouched topic. The straightforward court case, the simple performances take care of the overt drama when it occurs.