Scores really high only to turn into stereotypical.

There is this lovely qawwali that my mind just refuses to get over - such a refreshing score! Firstly because, words that drift along are perhaps as serene and, contrastingly, mordant as Rangaa Patangaa’s visual tone. And secondly because, it leaves me isolated from narrative flow, while growing on me at different crossroads. However, I found the use of words quite a inconsistent. Every stanza begins in Urdu, and concludes with Marathi verses, so on and so forth. Beautiful pieces of writing in themselves, they appear to be constrained just as Marathi characters stereotyped in Hindi films and vice versa. Staying true to this classic mishap, but surely not to a pathetic extent, we have a Muslim farmer born and brought up in Varhadi-speaking Vidarbha region of Maharashtra.

Right from the word go, there are tons of reasons to enjoy Makarand Anaspure play this strong-willed yet humble, straightforward yet stuck in complexities sort of personality. Now it’s a cliché to describe Anaspure’s grip over regional dialects, his look and costumes help bring more authenticity to the role. He might still have traces of Makarand Anaspure, but gratefully doesn’t perform like one. In this character-driven path, he lives a part probably he hasn’t in his entire career. With a mild dose of Varhadi and spoilt Hindi, this cinematic realism gets down to do real business. Where and how it ends up isn’t something new to our cinema. It is just that the ‘failure-to-buildup’ syndrome claims a promising subject this time.

His dearest bulls Rangaa and Patangaa are missing from the barnyard. They could have been stolen, he is not sure. But he knows they’re not lost. Animals remember their way back home more than humans do, he echoes. Disappointments are all over in his pursuits. Farming is at stake as well. But, livelihood takes a back seat to the apparent parenthood. Farmers see cattle as individuals and not a mere production utility, treating them the same way as their kids. Our guy has no children of his own, so the animal bonding is stronger here. This makes his heartbreak completely palatable. He hasn’t lost hope as yet, nor has his wife. Nandita Dhuri, in her carefree salwar kameez, looks apt for this role opposite Anaspure. But neither sound apt. They argue in such a calculated and deliberate tone that both seem to pretend. Occasional Hindi, occasional Varhadi or even Marathi follows without being free-wheeling. The attempt is there, but doesn’t really materialise. 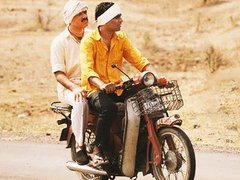 The emotional piece, played early on along with opening credits, flunks in empathising with the character’s state. It could also be because the narrative is at a very early stage to make that happen. Although it doesn’t take a chunk out of an already tiny timeline, it doesn't reach out to you. Drought has already broken him from within. But, the latest loss is unimaginable. Police’s inaction takes him into further despair. Scouting with his childhood friend too goes in vain. This treatment is cleverly balanced with humour. Satire keeps you involved with the mood as nothing goes in the characters’ favour. So far so good. A young, dynamic television journalist visiting his village crosses paths with him. He instantly takes the issue on – not that it really bothers him, but because he finds the story better than the usual drought and farmers’ suicide reporting.

The farmer himself sees no hope, but it instantly turns into a statewide issue thanks to our notorious media furore. This actually becomes a point where outside elements step in and the subject is made to take a back seat. Rangaa Patangaa is essentially a satire interlaced with farmer’s stories, problems and their age-old questions that still remain a question. It makes a mockery of journalistic standards, TRP-oriented stories, politics and more, while shading light on illegal cattle trading, bull castration, greed, casteism, among others. These fundamental issues remain only at face value, because the media frenzy has taken over already. Nothing matters henceforth, not even the replayed music. Portraying media’s immaturity for humorous reasons is all right, but not staying true to the real subject is criminal. Ironically, former journalist Anusha Rizvi’s exemplary Peepli Live still leads by example.

All’s well that ends well, and I couldn’t disagree more with respect to this film. Negligent politicians, greedy mediamen are certainly way too stereotypical for a film of Rangaa Patangaa’s class (the intended one). But in contrast, the climax misses everything big time! A pure piece of junk, it should’ve been cut out, if not, left unwritten altogether. The music really worked for me here because it came at a time when the visuals lose their voice.

In a career full of mostly forgettable films, it probably took some 22 years for Anaspure to get a brilliantly-designed role; and how he lives up to the deman! This is, by far, his most superior film, yet it is not so well-made. This also happens to be writer-director Prasad Namjoshi’s better work, even though it is written shoddily. The other film he wrote (two years ago), Kapus Kondyachi Goshta also releases alongside, and is even more mundane. What a moment to cherish and what an outcome to forget!