The Raid 2 tones down the amount of action from the first film in favour of a stronger plot, but that doesn’t mean that the nature of the action has been toned down in any way. A worthy follow-up to the first film, Gareth Evans serves us yet another possible cult action flick.

Gareth Evans’ 2011 flick, The Raid: Redemption, (which was dubbed into English and released worldwide in 2012,) very quickly became a cult action flick. It had some of the best cable-less action you’ve seen on screen, and had a gritty punch to it that made it a relentless, albeit extremely violent, action entertainer. That film had a threadbare plot, to be honest, but it worked because of just how good the fight scenes were.

Evans now takes it a step further, with The Raid 2. The action scenes, in terms of screen-time have been cut down in favour of an actual plot; not one that’s particularly novel, if you think about it, but one that makes for an interesting setting for the high octane action you expect from a sequel to The Raid. Think of it as a Yakuza film on crack.

Rookie cop Rama from the previous film, (who miraculously made it out of that film alive!) is now convinced to go undercover to infiltrate and help destroy a crime syndicate that has control over the streets of his beloved city. The mafia, of course, has its own politics at play. 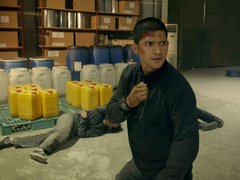 If you go in expecting to be hooked to the action from the word go, you’ll be disappointed; because a lot of time is spent establishing the setting and how Rama works his way in and upwards in the crime organization. Evans had a much higher budget this time round, and it shows. In terms of treatment, the film is quite different from its predecessor - smooth and precise camera movements, a multitude of locations, a nice non-linear editing pattern in certain scenes, and an overall superior production quality.

The hardcore action scenes are still there, of course, and they’re quite terrific. There is plenty of violent bloodshed, so this film is definitely not for those who aren’t fans of raw violence. Apart from the sprinkling it throughout the film, action fans will be satisfied with what they go in to the film for with just one particular car chase scene in the latter half. It is executed with such imagination and raw energy, that it will leave you salivating.

What one misses, however, is the threat of Rama’s cover blowing. The film concentrates so much on the political machinations at play in the crime world that you never really get a sense of danger about the fact that Rama might be discovered for what he truly is. The story lacks a sense of urgency about it. Adding that to the film could truly have taken it someplace else.

Personally speaking, I’d have been more than happy to see even more action in the film, because that’s what made The Raid so much fun. Yet, The Raid 2offers enough adrenaline-pumping stuff to keep you hooked, and if you set your expectations right, the plot works as well. Evans has firmly established himself as a genre specialist, and The Raid 3 has already been announced, and will certainly be a film to watch out for.