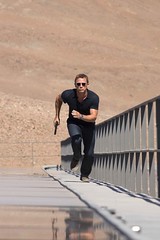 wogma rating: Beg or borrow, but do watch (?) - only for fans of James Bond, the rest well, watch if you have nothing better to do

The first ever sequel in the James Bond film series has Daniel Craig as an intense, rebellious Bond, obsessed with revenge.

James Bond is back in possibly the most intense and flawed portrayal ever of the character and actor Daniel Craig does a good job of it.

For those who watched Casino Royale, the story would make sense as this is a sequel, for others it would be a bit difficult to swallow.
The standard additives for the mix perfected over the years are in place; chases involving boats, cars and aero planes, beautiful women who can love and fight at the same time, alluring locales, a global conspiracy, and well tailored suits.

So what is it about this Bond?

For one, this Bond is taking things personally; he is seeking vendetta and the country be damned. Daniel Craig’s Bond has his blemishes; he is running hard and does not know whom to trust. The portrayal here is not tongue in cheek, neither is it played out as a super hero. There are moments in the film when Bond opens up and shows affinity as a fellow human being for other characters; these moments are few and far in between, but they are there. No wise cracks, no memorable quips as he dispatches the villains, his business here is dirty, forthright, and all too human.

Two, M’s role has been fleshed out in far more detail than other films; Dame Judi Dench is superb and demonstrates an almost maternal concern for her errant agent.

Three, the villain is an ordinary human being, with no special prosthetic devices or physical abnormalities to mark him out as the Devil incarnate: Mathieu Amalric’s big, big eyes convey his lunacy, and megalomaniacal ambitions.

The pace is relentless; the film opens with a car chase, carrying on from where Casino Royale left off. The cinematography is all sepia and gray, with no bright colours in keeping with the title sequence and the overall theme of the plot. The plot jumps from country to country in fanciful leaps and through it all we have Bond keeping pace.

The editing is fast and fractured, and leaves the viewer disoriented in the action scenes, especially in the opening sequence. There are no grand explosions, nor spectacular stunts; the end has the mandatory blow up of the villains’ lair, but none of it is particularly impactful. Possibly the director wants us to focus only on James Bond and his world which has been compromised by a personal relationship, and we do that as we look into Craig’s blue, blue eyes as he runs, jumps, shoots, fights hand to hand, but also seeks help from those he once tortured. Marc Foster has helmed Finding Never land and Monster’s Ball; two very different films. Here he brings a brooding intensity to the whole exercise, a sort of cynical pointlessness to the notions of patriotism, love, and death. Paul Haggis’s script does not really make sense in terms of logic, but holds up well under the demands of possibly the longest lasting action blockbuster franchise in movie history. Betrayal is the thread which holds it all together.

References are present with respect to earlier Bond films; a woman agent killed by painting her body with oil (in Gold finger it was gold paint), and an aerial dogfight (You only live twice). The famous Bond Gun Barrel sequence appears only at the end and the theme song is a mix of hip hop and breathy funk. (No operatic music here).

What will we get in the next installment, James Bond as a physically fit, skilled in combat, George Smiley with an insatiable need to understand one’s existence and purpose? A post modern Bond without a centre (a theme which comes up in this film) running only on instinct, and a script resembling some of the noirish Coen Brothers’ films?
I wait.

Yay! Thumbs Up, by meeta

Bond is after revenge, and encounters a shadowy global organisation which seeks to monopolize natural resources and sell them for a profit.
(Shades of Naomi Klein’s latest book, The Shock Doctrine, which is fact, not fiction)

It's an awesome movie....loved to watch it.Daniel Craig rocks man!