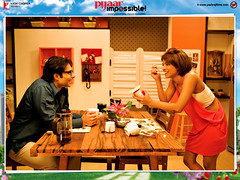 No seriously, is more mush possible? Actually, even if it is, I don't want to know. This was enough for a long, long time. Though they had enough maturity to touch upon some very valid issues revolving around love, it's a shame that it translates into a highly typical screenplay with the lousiest dialogues there could be!

An average looking person barely gets half a glance from the opposite gender. The good-looking people don't necessarily like the diva status accorded to them. They are only human, and would like to be approached by genuine admirers. These are two extremely valid points that keep the geek and the beauty away. And Pyaar Impossible actually dwells into them pretty deeply. Only unfortunately, they use the tackiest lines possible. So much that even a girl would want to avoid this thorough chick-flick.

Fine, you could give the writer credit for trying to have an actual story revolving around the core love story to give the film a little depth. But, except for Alisha (Priyanka Chopra) the other characters hardly had any depth. Abhay (Uday Chopra) and Siddu (Dino Morea) are as white and black as they could be. And it's not like they evoke any emotion in you as a one-dimensional character has potential to do.

It's this monochromatic view of the world, be it Abhay's father (Anupam Kher) or the supposedly 6-year old girl, Tania (who's not credited on the official site), that makes everything very flat, only that it's exaggeratedly flat. Abhay is too nice, his father too patronizing. Siddu is too mean. Sure, there might be people in the real world who are all sweetness or all manipulative. But they are no fun to watch on big screen, especially when they have nothing smart or engaging to say. Oh yeah, the Tania, the 6-year old granny is either extremely annoying or extremely mature. Sorry, that doesn't count as a shade of gray.

For me, the deal was shut in the first few scenes when Uday Chopra's voiceover is 'trying' to be funny. Ok, they might have tried to prove that geeks have a lousy sense of humor, but a film is not supposed to make my eyes roll! And certainly not make me control my yawn or give out a mock-snore because the dialogues are so cliché and preachy. Somehow, I don't see much choice left to the actors in such a situation. They have to exaggerate their sugariness and bitterness and thus come across as caricatures.

It's painful that what could have been a refreshing course on love 101 and in good detail, becomes a discourse you would want to avoid. Despite the good-looking people playing their role to perfection. Oh well…maybe next time Yash Raj Films, you'll be able to avoid clichés that you created.

Thumbs up, by Hanumant Bhansali, Radio Sargam : ...Except for the few bad scenes here and there post interval, the movie works on a whole and makes it worth for one time watch.... full review

So-So, by Bobby Sing, Bobby Talks Cinema.com : ...apart from this publicity goof up, “Pyaar Impossible” still is a pretty decent movie with worth watching performances from its lead pair and the girl child.... full review

So-So, by Taran Adarsh, Bollywood Hungama : ...Uday's screenplay remains faithful to the main plot, not deviating one bit. At the same time, it could've been tighter in the post-interval portions.... full review

So-So, by Shweta Parande, Buzz18 : ...All the nanny and babysitter drama is straight out of so many English films, and you kinda don't know where the film is headed. At the same time, it's predictable.... full review

So-So, by Gaurav Malani, indiatimes : ...Like most romantic comedies, the basic problem with Pyaar Impossible is that in the first ten minutes of the film you can predict the last ten minutes... full review

So-So, Indicine : ...Loaded with glamour, the film actually had the potential to be much better, if only the love track was more refreshing and the story had some twists to avoid getting too predictable.... full review

So-So, by Sarita Tanwar, MiD DAY : ...It attempts to highlight the shallowness of attaching importance to looks... full review

So-So, Movie Talkies : ...Priyanka looks stunning throughout the film and Uday tries his best to infuse life into his nerdy act but none of the players can lift the ordinary written word... full review

So-So, by Sukanya Verma, Rediff : ... it's harmless. You gain nothing. You lose nothing.... full review

So-So, by Sonia Chopra, Sify Movies : ...Pyaar Impossible is one of those films that could have been hugely entertaining and contemporary, but loses out because of a few faults.... full review

So-So, by Vipasha Pillai, StarBoxOffice : ...This film is a must watch for people who think pyaar is impossible between two different contrasting personalities. Simply, because it’s not!... full review

Thumbs down, by Noyon Jyoti Parasara, AOL INDIA : ...Priyanka Chopra scores with her expressions. Her body language is such that she turns into this girl who you would fall in love with. Uday does his best but is not half as convincing.... full review

Thumbs down, by Naresh Kumar Deoshi, Apun Ka Choice : ...The ennui of Abhay’s drab life is presented on the screen with no less dullness, and his capers with Tina the menace (Sofia Malmdern), instead of entertaining, lull one to slumberous winks.... full review

Thumbs down, bigoye.com : ...Even though the movie is bad, Uday Chopra has worked to show his skills. Priyanka Chopra is the centre of attraction, with all glittering make ups.... full review

Thumbs down, by Baradwaj Rangan, Blogical Conclusion, The New Sunday Express : ...Even Alisha (Priyanka Chopra, overdoing the perkiness) comes off like an over-caffeinated American schoolgirl, her every gesticulation bouncing off the walls.... full review

Thumbs down, by Sonia G, Bolly Spice : ...The biggest drawback of the movie is its script, penned by Uday Chopra. Yeah, that's right. Uday Chopra. He's written the dialogues of the movie as well.... full review

Thumbs down, by Deepa Garimella, fullhyd.com : ...Still, Uday is pleasant and spontaneous, and has a better-etched character than the rest. Priyanka should have toned down on the caffeine and exchanged wardrobes with the kid whose clothes are longer than hers.... full review

Thumbs down, by Martin D'Souza, Glamsham.com : ... this movie actually repackages Uday Chopra and the dude does a decent job. He stays in character and actually manages to get on your nerves. ... full review

Thumbs down, by Mayank Shekhar, Hindustan Times : ...This one – oscillating between dull conversations, and duller conflict around a stolen computer programme – hardly reaches beyond the premise of its promos.... full review

Thumbs down, by Rajeev Masand, IBN Live : ...On more occasions than one, the makers compromise basic common sense to deliver scenes that are offensive or plain dangerous. ... full review

Thumbs down, by Mihir Fadnavis, india.com : ...The chemistry between the leads is nonexistent and so lunkheaded and ill-conceived that it makes your average, idiotic Diya Mirza-Fardeen Khan outing look like the reincarnation of Jaya and and Amitabh Bachchan... full review

Thumbs down, by Anupama Chopra, NDTV : ...Pyaar Impossible is one of those superbly shallow films that manages to offend you on every level - as a viewer, as a woman, as a mother... full review

Thumbs down, by Ashok Nayak, Now Running.com : ...Priyanka Chopra looks great, with a perfect body and make up. Uday Chopra plays the geek very well. The kid in the film is fabulous, but her character was irritating. Dino Morea is a non actor.... full review

Thumbs down, by Subhash K Jha, Now Running.com : ...The daughter's lines are written to sound cool. And the seven-year-old girl mouths them as though she heard them all on television.... full review

Thumbs down, by Namrata Joshi, Outlook India : ...And it’s a bad Hollywood rom-com that won’t catch your interest even on Sunday afternoon TV.... full review

Thumbs down, by Sethumadhavan, Passion for Cinema : ...the Head of P.R and Marketing in an I.T company, Priyanka is shown as someone who has zero idea of computers and yet is allowed access to the central server room of the organization also... full review

Thumbs down, by K N Gupta, SmasHits.com : ...he juggles everything from story, screenplay and dialogue. However, he loses no effort to do full justice to his role. He has worked hard, but alas not concentrated on one thing at a time. ... full review

Thumbs down, by Nikhat Kazmi, Times of India : ...Nothing stupendous here... full review

Yay! Thumbs Up, by Susancai : it's nice

So-So, by Toyota Corolla For Sale

idle brain.com jeevi says:First half of the movie is uninteresting and boing. The director doesn’t get audiences interested in his story telling. Movie gets better towards the climax. Pyaar Impossible takes the Hollywood route in terms of storytelling where hero joins as nanny to heroine’s daughter to impress heroine to fall in love with him. It is more like a chick flick. On a whole, Pyaar Impossible is a disappointment.

@Harpreet The title song was too repetitive for my taste. I certainly enjoyed 3 Idiots soundtrack better, it was pretty different.

Thanks @TimELiebe for a lovely review :D