If all this torture wasn’t enough, out of place songs make matter worse for you.

Premasathi Coming Suun is not a children’s film (not that it is inappropriate for them). But everything about this comedy film is so childish that even kids would laugh at it. It’s a sheer waste of money not only for its producers, but also for viewers.

The film is an uninspiring rom-com of a young man, who gets married to a gorgeous woman chosen by his grandmother. This bride, however, has a hidden agenda. As the groom’s family discovers her secret subsequently, it’s you who ridicule the moment more than anyone. Nobody really cares if a film is inspired (or copied) by other films as long as it moves you or brings smiles to your face. Unfortunately; this immaturely-written, predictable film kills your excitement at every point.

The prevalent issue of Premasathi Coming Suun is that it lacks sincerity. Director Ankur Kakatkar seems to be more concerned about how stunning his leading lady Neha Pendse looks. Unfortunately, it leads to lacklustre display on every front. Pathetic story, incongruous sequences, lame direction, futile production - you name it and the film has it. Regrettably, what the film doesn’t have is a single scene that can make you sympathise with the protagonists’ emotional state or hook you. 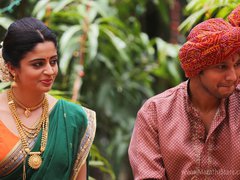 Premasathi Coming Suun is another fine example of mundane films that remind you of over-exaggerated acts like in theater. In fact, this film occasionally appears to be one such play projected on celluloid. None of the actors show their true grit to at least help you tolerate this bizarre narrative. The lack of prudent writing is certainly at fault for their crippled performances. The buck stops at Kakatkar.

The makers’ heavy reliance on tedious one-liners and punch lines falls flat on their faces. It is high time our filmmakers realised the seriousness of comedy. A closer look at Marathi comedies released in the recent past reveals that they all look prosaic; all thanks to worn-out, rhymed lines. I am not at all against such dialogue, but their overuse is an issue. A fresh approach on this front is a must.

If all this torture wasn’t enough, out of place songs make matter worse for you. Move over Sheila and Munni, because Gulabo has come to grab all your attention. This particular song could have been easily edited out.

Give this film a miss unless you want to pull your hair out.