Pompeii, directed by Paul W. S. Anderson, is named after the real city that was destroyed by the eruption of Mt. Vesuvius. A romance set against a real life tragedy that occurred nearly two millennia ago, Pompeii remains a forgettable film despite its gigantic scale and decent visual effects; because there's nothing in it that binds you to the film.

The real story of Pompeii is a tragic one. A thriving city under the Roman empire, progressive for its time, gutted by the eruption of Mt. Vesuvius, a constantly rumbling volcano that had been non-destructive for centuries till then.

Director Paul W. S. Anderson, unlike his namesake (the one with that most enviable of filmographies!) is best known for camp; think Mortal Kombat or Death Race. In his hands, Pompeii, the film, becomes a VFX-heavy actioner with a love story as well as a bromance thrown in. The film isn't particularly unwatchable, but this is one of those films where you sorely miss familiar faces in the lead roles; the kind of film that needed raw star power to justify the scale it has been mounted on.

The story, undoubtedly, had weight. A budding period romance with obstacles of its own, in a town at the base of a volcano that, unknown to them, is on the verge of a cataclysmic eruption. If told with a more sensitive, auteristic vision, the film had the potential to go down as an epic love story. 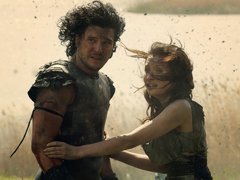 Instead, what we get are predictable gladiator-style fight scenes, English with British and American accents in a Roman city, and a half-baked romance where you hardly ever feel a connect with the lead pair - simply because you hardly ever see them together.

In fact, the lead character Milo's romance gets lesser footage than the story of his growing friendship with a fellow slave named Atticus. Such is the contrast between these two stories, that in the dying moments of the film, you root for the two men to end up alive together, irrespective of whether Milo unites with his lady love or not.

All of this could still have made for some genuine big screen fun, if the film had a charismatic cast, or, at the very least, a big star essaying the role of Milo. Kit Harrington, who plays the mysterious, strong and silent Milo, just doesn't have the magnetic persona that was needed to make him a character you'd want to cheer for. The familiar faces in the cast - Kiefer Sutherland, Carrie-Anne Moss, Jared Harris - seem almost embarrassed to be there. Adewale Akinnuoye-Agbaje plays Atticus with an endearing stiffness. Despite having no obvious acting skills, you root for him more than you do for Milo.

To be fair, the film does have decent VFX. The long shots of Pompeii, with the imposing Vesuvius as the backdrop, look quite impressive, as does the period feel, even if its historical authenticity is quite suspect. But the action set pieces aren't particularly imaginative, and the 3D glasses darken the film a tad too much. Mercifully, the film is brisk and short, not testing your patience too much.

Despite being mounted on the scale that it is, Pompeii gives a generic, been-there-seen-that feel to it, which isn't aided in any way by having no anchoring presence to carry the film through. It's the kind of film that is so hard to take seriously, even though it seems like there are people who've given it their all. It wasn't until the final shot of the film, a touching symbol of eternal love, that it struck me that there was a lot of wasted potential in the real as well as reel story of Pompeii.