Technological frills fade away in absence of empathy, and you’re left scratching your head.

As the first frame switches from a cinematically-lit, colonial structure – amidst some strange lightening and intense score – to an old person in a conventionally-lit office-cum-library - to a few youngsters giggling at a wayside paan-bidi shop, backdrop stays unspecified, dialogue becomes uninteresting, humour sounds unpleasant. But, you do sense the eccentricity under the skin. It conveniently drives Phuntroo all along, taking care of irrational motivations for characters and their deeds.

Eccentricity, comes with benefits and failings over here. Chuckles erupt for a good number of times, whereas emotional attachment remains at the bay. A minute or two into the film, as you start distinguishing between who’s who and what’s what, you get a tinge of a rainy, smoky, slow-mo, love-triangle-ish moment. In a way, it’s the crux of the film. A standard situation though it maybe, it lays out emotional turmoil, ups and downs, motivations and so on. Well thought.

But hold on, subsequent scenes unfold an underlying catch. Vivid images do try to allure you, but do not essentially involve you emotionally. You just watch without being hit at your emotional core. Sensing affection, attachment or empathy here is like finding water in barren lands. And mind you, I would not be overstating if I say that this flick has zero sentiments. Don’t remember if this film opens up with a disclaimer to stay “detached”. 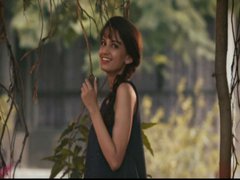 The old structure is an engineering college as you soon figure out. It appears expansive structurally. As far as its magnitude goes, an annual gadget contest would assert a word or two. While a single student appears to be competing; others are presumed to be preparing for the contest too. You see love equations more closely, though not explicitly. Quirkiness is at its best when nothing seems to be going right for the protagonist. But just before his heartbreak, he comes across a secret project entitled Phuntroo (a mechanical slang) absolutely out of nowhere. After this pure case of writing laziness, he assumes the mission in order to fulfil his greed and desires.

Surely enough, regional slangs, if put well, throw an unbeatable depth of character and humour into situations. But in a film like this, slang becomes pointless and after a point is quite puzzling. Supposed adult talks or acts, for that matter, fall flat. Dialogue, on the other hand, creates a contrasting picture. At times, they are intelligent. They swing into the moods of characters and their milieu. Others, however, are lame and unwanted beyond a doubt.

The underlying theme of Phuntroo is metaphorical. It tries to explore conflicting relationship between humans and technology. It questions the existence of mechanical love. From human greed to our imminent future, it has got so much to speak about. But as regretful as it could get, the whole subtext comes as superficial and ends up being nothing. Moralising the way we love, just doesn’t work.

One of the high points of the film (incidentally, also its lowest) is detail in production. It is designed is so meticulous that lots of factors feel staged, pretentious, and a sham. You could blame the lackadaisical narrative, but my focus refused to shift from technical showiness.

For an industry where mainstream films are still made on minuscule budgets and new genres (or subjects) remain untouched for fear of lack in cash flow, Phuntroo could be a sign of hope. But it leaves questions unanswered. Do we need better stories? Do we need better ways to tell those stories? Do we need new genres under the pretext of being radical? Or do we still prefer our usual mediocrity? It’s high time we ask ourselves such questions. Your answers, perhaps, would echo your views about our films, including this one.