Isn't meant to scare you, but show you how the scared feel. And does it so well.

It is so, so rare for a film, a Hindi one at that, to treat a mental illness with such respect. For that alone, I can give Phobia's entire team a truck load of flying kisses. I am sure, mental health practitioners will have many a bone – small and big – to pick. But, when was the last you sympathized with a mentally ill character, let alone empathize too!

You feel Mehak's dread, her fear seems real and whoever doesn't understand it seems like a villain. Every time you feel like the creep has gone on for too long, you shudder at what it must be to live with it day in and day out. It is a real thing, such fear, even if it is not necessarily in this exact form.

Of course, Phobia could have been miserable to sit through (in the wrong way) if it were not for Radhika Apte. One of the main things that get annoying for me in this genre are wide-eyed fear. Radhika Apte's eyes work here, though. They go with the rest of her completely freaked out body language. 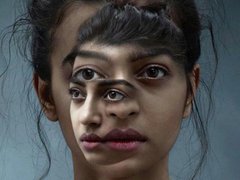 So over-powering is her performance and screen presence that the rest of the main cast is completely over-shadowed despite good acts. The side characters are caricaturish and try to add a quirk to the film that goes against the film.

This probably stemmed from the makers' own fear that they would bore their audience with prolonged show of fear. In a similar vein, that could also be why they added elements extraneous to the fear, like the narrative style. It is understandable, even if it didn't work for me. Interestingly enough, things that did work for me too were a little extraneous. Like the feminist angle caught me off guard and brought a smile. However, it didn't fit in with the otherwise spooky narrative.

Even so, I lean towards give this one a once over at least. Especially, to sensitize yourself to the world of someone who makes up a world of their own – quite out of their control.