wogma rating: Catch on TV/online for sure (?) - SRK-fans, who can stop you from rushing to the theatre? Others, buy tickets to boycott boycotts ;)

What is it about action films that feels funny when SRK does it, but we lap it up when it’s Tom Cruise? Once you shake that off, Pathaan is entertaining and good, silly fun. At times it’s so cheesy that you can’t help laughing. The stakes are high throughout the film, so you’re with it even if you know how it’s going to end.

Squeals of “Shah Rukh” “Shah Rukh” from different corners of the theatre as I enter it. I’d say my movie is off to a good start already. There’s nothing like watching the exhilaration of fans. I don’t get it. But I love watching it. The rest? Well, once you see heavy-duty goons waiting their turn in line to be beaten up by the hero, you know not to take the film seriously. Having given into that, it is some solid action entertainment watching an agile Shah Rukh Khan twist and turn his body to get his way.

There is never a dull moment, and even though you know they are likely to get out of the mess, you want to know how. And to keep you on your toes, the good team loses a couple of times too.

And that is what it really boils down to. Watching Pathaan is a lot about admiring Shah Rukh Khan’s physical dexterity. The man is 57!

Of course, this is within the context of some really high-stakes situations. The villain is butt-hurt and supposedly dispassionate. So, the end goal is something absolutely out-of-reach. The two timelines subtly add to the drama because through most of the film, we know what happened. But we don’t know how. A lot of it is shown, yet some of it is told—the latter, of course, is a put-off. A part of the disappointment is mitigated by the presence of a female soldier with a more-than-a-prop role. Put together, Pathaan’s writing becomes more than what one would expect from films of this genre.

To top it off, the stakes are always, always building up. Even in the details. So, there are two helicopters in air, attached to each other, approaching a tunnel. That’s thrilling enough. But wait, they can fly over the tunnel. Uh-oh, the rope keeping them together is maneuvered. Now what? And this goes on almost non-stop. And one situation subsides only so that another one can start. This means there is never a dull moment, and even though you know they are likely to get out of the mess, you want to know how. And to keep you on your toes, the good team loses a couple of times too.

Interestingly, given the decent writing, there are three gaping misses. Not holes in the plot, that there are many. Despite the constant action, there is enough time for me to predict what will happen next. There is always a pause, a slow-mo shot, and an emotional dialogue that brings the action to a standstill. Sure, this is par for the course in an action thriller, but it is clumsily done here. It seems like a pre-decided rhythm to which the pauses are inserted rather than an organic turn in the story. 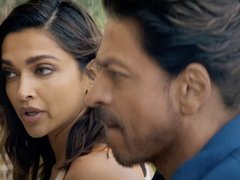 Then there is the lacklustre dialogue. Even the most emphatic delivery cannot help if the deliverable is less than plain. And lastly, the film misses the chance to ask deeper philosophical and political questions that the story allows. And yet, it is understandable that they don’t have the luxury. And alas have to choose the easier path called Pakistan-bashing.

Having said that, the action choreography is slick and executed really well. Except for the shabby CGI in the UAE sequence, the other action sequences have some great moves. Yes, I repeat a line for Shah Rukh’s flexibility and grace. Is he agile! And hey, he even has a couple of good moments of acting.

John Abraham came across as an intriguing choice for a menacing villain. His character, Jim is menacing and brutal. He should scare me to the bones. But, I could think of him as either cute or wooden, not letting me take him seriously. I always wondered what a not-scary-looking but merciless villain would be like. And now I know, “not bad, a good change from the normal.” Similarly, Deepika Padukone’s presence is appreciated just because of the screen space she gets in a male-dominated genre. Else her action, dance, dialogue delivery are all a bit too mechanical.

But the action is wholesome. It is interspersed with some light moments. Sometimes they are entertaining because they are self-referential. At other times, the action is so ridiculous that you admire the creativity. And you remind yourself, you would have accepted it if it were Tom Cruise. My gut says that the pauses I spoke of earlier make the difference. We will have to see a couple more in the YRF Spy Universe to know if that’s true.

Meanwhile, this one was good fun. And as you watch the post-credit cuteness, you know the makers enjoyed bringing it to us. And hey, it helps that I get to participate in not boycotting the film.

Want to Watch, by Harpreet Singh

Thank you for that review, it’s just what I needed. Off to Cinemark this evening with my family of 4 !

Dear Meeta, couldn't resist my temptation to catch up your review from the ICU bed. Alas.. I can't head to the cinema-hall...! Would LOVE watching this..! Heard that fans are going GA-GA over Bhai's entry..! (smiles)

Raj has given this movie a Yay! Thumbs Up(Bollywood seriously needed a wholesome entertainer). Raj has posted 99 comments and has rated 67 movies. See Raj's page for more details.