Layered, stark and sensitive, Parched is a must watch film - even if it is not a film that is watched easily.

Parched is a must watch film - although it is not a film that is watched easily. Layered, stark and sensitive, it is a tale told with disarming affection on the one hand and relentless doggedness on the other. At another level, the film is a unicorn – it is rare, nearly non-existent beast that is unapologetic about letting its women be. Just be.

Rani (Tannishta Chatterjee), Lajjo (Radhika Apte) and Bijli (Surveen Chawla) are three women united not so much by their common miseries but their uncommon, rousing but entirely believable joie de vivre (exuberant enjoyment of life). Anguish and unfairness find ever new ways to seep into their collective lives as indeed into the lives of the other women in the village and the film takes us on the journey of their travels and travails. It is a fine, often heart-rending narrative told without fear or favour.

Rani's unnerving silence in the face of constant uncouth behaviour and debauchery by her son Gulab is a terrifying glimpse into the power of conditioning and its vice like grip over who we become and what we are capable of doing, despite clearly knowing better. And how its greatest power is in first making us blind to its obviousness and then blind to the blindness itself. 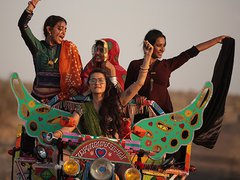 The film is not without its glitches - the ending which is well, after all the stereotype breaking, a hark back to an old one. The 'cave' scene works only as a stand alone one and not as a part of the larger narrative. Elsewhere a few threads in the story are left open.

Leena yadav's direction is raw, clear-headed and decisive. The applause needs to be for what the film is saying as much as for how it is saying it. As an aside, you'd think that roping in Russell Carpenter to shoot the film would be a minor miracle until you recall that she managed to cast Ben Kingsley for her last film.

Speaking of which, the film is beautifully cast. All three women, as indeed a host of supporting characters, shine and shine luminously. While Radhika Apte's craft and graph have been on the rise for a while now, her turn in this film is one for the ages. Surveen Chawla is a revelation - not a trace of self-consciousness in a performance that is above all, pitched oh-so-right.

The dialogue hits home and how! Everything that the men utter has its toes dipped right into the patriarchy that we see and have come to expect. Some of the dialogue mouthed by the women too, are fresh, pithy and very effective.

Twice, over this past fortnight, we have had films that deserve to be celebrated. If Pink was about the living reality of three urban women in their fight for freedom, Parched is a film of three rural women and their struggle to hold on to the last remnants of their dignity.

I, for one, came away enriched with multiple things: a new vocabulary of eclectic cusswords, but just as memorably, a film that I was happy to have had a chance to see, be surprised by and eventually savor.

This film made 7.5cr in France and less than 1cr in India.

Terrific film ! Thanks for the review...Hoped for meetu's perspective though

fanofcfc8 has given this movie a Yay! Thumbs Up(A must watch !). fanofcfc8 has posted 14 comments and has rated 12 movies. See fanofcfc8's page for more details.