wogma rating: Watch for sure, preferably in theatre (?)

A charming, uplifting film, about a mother going about the business of being a mother, the warmth of which you will feel well after you have left the theatre.

The first surprise is that looks like the film is not based on a real-life story. As bizarre as it sounds, this is refreshing. A film based on a relatively ‘different’ theme—that of a woman taking on a sport way past her prime as a sportsperson—is originally written for the screen.

That the trailer gives the sense of it being slice-of-middle-class-India-life is endearing. I am especially looking forward to Neena Gupta’s character, who plays the protagonist’s proudly unsupportive woman. Another movie directed and written by a woman with a woman central character. I like this changing face of Hindi films. Hopefully, I will like the film too!

Such an ordinary story, but such an unordinary film! Almost every other capable woman around you charts a career path ‘going with the flow’ rather than deliberately pushing herself in a specific direction. Jaya Nigam’s (Kangna Ranaut) son’s aspirations drive her back into her life as a sportsperson. She happens to be in the right time and the right place for an opening in a corporate kabaddi team. A national team coach who is a long-term strategist paves her way. But it is such an out-of-the-ordinary film—about the day-to-day, unquestioned personal sacrifices a woman makes as a mother, but it doesn’t once glorify motherhood.

had any of the actors over-played even a tiny notch, the characters could have become caricaturish

It’s easy to do the most difficult job in the world—be only a mother. It’s so much more complicated when she feels small because she doesn’t allow the human in her to have aspirations. It’s earth-shattering, or like a character in the film says, “I predict an earthquake,” when a mother chooses to break the barrier and give her ambition a shot. And the social implications crush her soul if the ‘working’ mother doesn’t have an enabling support system. Panga says all of this without announcing it out loud. In fact, it tells some of these things by not even mentioning them.

Why else would a woman boast that she doesn’t need to take her husband’s permission to do what she wants? Shouldn’t that be the default? Panga uses the more-or-less progressive husband to shine a spotlight on what many men in his position aren’t like. Also, regressive characters must not really fit into the positive tilt the film clearly wants to carry.

It actually goes a bit further and shows the audience a mirror. For a bit, when the family is suffering while Jaya is working towards representing her country in an international event, the film moves the spotlight on us. “Are you feeling sorry for the family that isn’t being able to cope because the woman of the house is not around?” “Are you wondering if it was the right call for her to aband... leave them to her own resources, even if it is for a bit?” “Should she have trained them to be more independent?” There are other times when her guilt translates to her picking a fight with her husband, Prashant Sachdeva (Jassie Gill). And you feel bad for him. “Did you catch yourself calling her unreasonable because you wouldn’t have called Prashant unreasonable if the roles were exchanged?”

None of these undercurrents is explicit in the film, but it reaches the audience. Which is why, the lead character, Jaya, is not the best-written character in the movie. It is the ever-understanding, doing-the-right-thing husband, Prashant which must have been a struggle to write. Striking a balance between wanting his wife to do well and yet revealing the inconvenience to himself in just the right amount, is no easy task. But, Panga manages to achieve that and more. 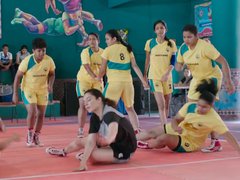 While writing Jaya’s struggle must have flowed smoother than the rest, balancing between over-doing and under-doing, her inner battle must have been a mean task. Similarly, the smart-Alec 7-8-year-old son, Adi (Yagya Bhasin), the alter-ego best-friend Meenu (Richa Chadda), the supportive-but-not-supportive mother (Neena Gupta), the always-there neighbour, the new-best-friend Nisha Das, all completed the picture without becoming run-of-the-mill filler characters.

Jaya’s mother, for instance, says upfront that she is not supportive of Jaya’s decision to go back to playing kabaddi. And she stays consistent even when she is proud of her daughter. Adi is a smarty-pants but behaves his age when it comes to dealing with disappointment. The writers have a firm grip on such nuances in the personalities of their non-lead characters. This makes the unreal, fairy-tale-like story of Panga, believable. Doable in real-life. That hope, the intentional simplification makes Panga endearing and moving at the same time.

Panga uses the more-or-less progressive husband to shine a spotlight on what many men in his position aren’t like.

The simplification seems intentional because the distance from standard sport-film tropes seems deliberate. The villain is the woman’s internal struggle. The villain is the situation she finds herself in owing to normalised gender roles. And these villains can give the Gabbar Singhs and the Jokers a good run for their money. And yet Jaya’s life doesn’t have the villains often seen in real-life society.

Of course, the writers could get away with this bit because the entire cast looks, talks, and behaves like someone you have met in real life. Sure, they represent only one small section of the population, but we all know that one ever-available neighbour, that doting husband, the taunting mother, the just-because rival. But had any of the actors over-played even a tiny notch, the characters could have become caricaturish.

They also add to the cheerful texture of the film. Even as you see Jaya being belittled, you know that she is mostly content with her life as a mother, as a wife. You see the commentary on the importance of “getting married” in a girl’s life, but it is turned into a joke. You see boys and men being sensitised to the insensitivity of gender roles, ever so slowly—I especially enjoyed seeing them realise the willpower needed to be supportive. I wish we could see a little more of their internal dialogue. But I assume that would have to come at the cost of spelling things out, and in that case, I am happy they left it out. The generalisations through comments on things like moms’ Whatsapp groups are as amusing as they hit the right spots.

It is also interesting that “women empowerment” isn’t thrown into your face until mass media enters the story. So, a movie which is end-to-end about empowering women doesn’t actually beat its chest about it. Also, A sports film that uses sports only as a medium to amplify the point it wants to make. Sure, it has its underdog bits and its “last second” clincher bits to add to the drama in its narrative. But they all seem secondary.

Even as some of these moments and/or situations weaken the telling, especially in the second half, they are also the most heartening bits about Panga. These shifts in story-telling are not done too often in Hindi cinema, yet the trials are becoming normal. The experimentation with writing that 2020 has already seen treats the audience with respect. And gives birth to the hope that trying to tell regular stories differently will oxymoronically become the norm.

Yay! Thumbs Up, by Mahesh Verma : Great Movie and amazing performance of Kangana

Yay! Thumbs Up, by rohan : In Panga movie trailer, Kabbadi sport has been put in centre of interest.Rating: 4.5(out of 5stars)