Grief or lack thereof owing to a death in the family is aptly treated with melancholy. Predictable as it is, Pagglait doesn't scratch beyond the opportunistic attitude of the people around the deceased. Within the boundaries it sets for itself though, the film keeps you interested despite its slow pace.

Anyone with the tiniest of experience with the death of someone close will know that along with the grief comes the transactional aspects of death—the will or lack thereof, the insurance and the complications that it brings along, the bickering relatives who disagree on the last rites. Pagglait uses this as the backdrop to show a coming-of-age story of the new widow, Sandhya (Sanya Malhotra). It is slow, predictable, and doesn’t go beyond the superficial in terms of story and character development. But the observations about society keep you with the film for its less than two-hour run.

The story, very slowly, builds up to a climax that is way too predictable.

These observations go beyond the white sari that a widow is supposed to wear or how artificially some people mourn at funerals. It paints the strokes of the thick line between appropriateness and inappropriateness at such occasions. However, it exaggerates in doing so, and that’s where it lost me. That the mourning family doesn’t like the bland food it is supposed to eat is understandable. But that someone would go to the extremes that a character goes to satisfy their cravings doesn’t blend with the film’s otherwise real-life milieu. And this is just one example of such hyperbole.

Thankfully, much about Pagglait is subtle too. You know that the mourning father is offended by a relative’s suggestion only through a slight movement in the eyes. And even though it is only slight, it is difficult to miss. Similarly, the more vocal mother deals with her grief by engaging herself in worldly matters. Of course, this is largely owing to some believable and relatable performances by Ashutosh Rana, Sheeba Chaddha, and the rest of the cast.

If only the overall story arc had more detail, the slow pace could’ve been better justified. Usually, a gentle, lyrical pace adds depth to the film. Here, it gave me the time to think about things outside of the film.

Anyhow, Pagglait is a concept that would certainly sound irresistible on paper, especially the dark humour. And some of it works, and a bit feels out-of-place. Also, the story, very slowly, builds up to a climax that is way too predictable. 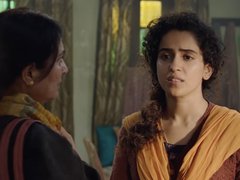 Death, while it closes doors for some people around the deceased, darkly enough, it opens doors for others. Not in an opportunistic way, but in a practical social-construct way. Pagglait valiantly tries to paint both scenarios in multiple ways. It hits some on target and misses some.

Thumbs up, by Bobby Sing, Bobby Talks Cinema.com : ...Summing up despite the shortcomings, this is the worth watching attempt by the team as it entertains and enlightens shoeing us the mirror. Pagglait also made me recall significant sequence from Shyam Benegal's SURAJ KA SATWA GHODA, but that needs to be shared in a separate write-up meanwhile, do watch this as a must and give it a thought.... full review

Thumbs up, by SUPARNA SHARMA, Deccan Chronicle : ...Sheeba Chaddha as Usha, and Natasha Rastogi who plays Sandhya’s mother are both excellent. These three characters, along with Aasif Khan and Daadi, turn Pagglait into a welcoming home one can go to, just to get lost from the world for a bit.... full review

Thumbs up, by Vibha Maru, india today : ...Pagglait largely comes off as a well made film it chokes under the burden of too many topics. Along with religion and marriage, the film also makes a commentary on the menstrual cycles which seems unnecessary. the scenes where Sandhya coaxes Akansha to reveal details about her relationship with Astik also looks repetitive and jarring... full review

Thumbs up, by Mayank Shekhar, MiD DAY : ...She made her debut as the second/third lead in Dangal (2016), and has since scripted an unusual but memorable filmography already. I could watch her on screen for a couple of hours, while she seemingly does so little — yet manages to hold your attention, through and through. That’s what you do in Pagglait, and you aren’t disappointed at all.... full review

Thumbs up, by Saibal Chatterjee, NDTV : ...The rest of the supporting cast is great too, not the least among whom are Raghubir Yadav, Shruti Sharma, Natasha Rastogi, Meghna Malik, Aasif Khan and Chetan Sharma. Sayani Gupta and Sharib Hashmi put in special appearances. The impression they make goes way beyond the length of their roles... full review

Thumbs up, by Gautaman Bhaskaran, News18.com : ...However what is more fascinating than this comes right at the end, turning the work into a remarkable study of human kindness. Sandhya’s compassion without the usual indian cinema melodrama, tears and all of that for her parents-in-law is heart tugging that completely transforms the movie into something that is worth pondering over.... full review

Thumbs up, by Sayan Ghosh, The Hindu : ...All in all, Pagglait has a unique way of tackling social issues that have always been a matter of concern in a social setting increasingly plagued by crippling orthodoxy. Only now, its depiction has become more genuine, and make its viewers contemplate the hard realities of the Indian experience.... full review

Thumbs up, by Shefali Deshpande, The Quint : ...The story also caters to satiating macabre curiosity that a lot of us harbour. When we know a partner cheats on us, we want to know what the other person looks like, sounds like, acts like and maybe even what they taste and smell like. When we see an accident on the road, which maybe bloody and unpleasant, we are desperate to tear our eyes away but we can’t help it. We want to know more. It is this need, to want to know something that is perhaps, not “good” for us, that this film understands.... full review

So-So, by Deepa Gahlot, Deepa Gahlot : ...The film can be accused of being too simplistic and pushing the right ‘woke’ buttons, but that may just be what appeals to its audience—if a passive young woman from a conservative family can pull herself out of the morass of middle-class hypocrisy, anyone can.... full review

So-So, by Aishwarya Vasudevan, DNA : ...Stories coming from the heartland of the country are a reflection of how people are unlearning age-old regressive traditions. It's not a necessity that the younger generation of the family wants to break the bondage of the traditions but the support of older people help in doing so. Pagglait starts as a film about a family mourning the sudden demise of the oldest son who got married five months back.... full review

So-So, by Rahul Desai, Film Companion : ...I’m all for a lilting album, but there is a time and space for it: Pagglait does not earn the obviousness of orchestrated sound. Instead, a single word or blank stare can go a long way. Take the sparse title – a colloquial term of patronizing tone, that says more about societal prejudice than the people it’s directed at. As Sandhya eventually notes: “When women get wise, everyone calls them mad (pagglait)”. But when a film gets wise, it turns everyone into a fad.... full review

So-So, by Madhuri V, Filmi Beat : ...Raja Kumari and Amrita Singh's track 'Pagal' stands out in the film and delivers the feels. The rest of the songs flow well with the narrative but lack a recall value.... full review

So-So, by Shubhra Gupta, indian express : ...Also, it’s puzzling that the name of the town is never mentioned, but the neighbour‘Kanpur’ keeps coming up. Obviously, it’s a UP town, which has famous ‘meat ki dukaans’ as well as ‘choley bhatoorey’ chaat-shops. Why this reticence? Have we gone right back to the time when we could not name names? Bollywood came to this after years of la-la-landism; it’s sad to see it being dispensed with, even as we wish this Sandhya, and all other Sandhyas, the best for a life that she will create for herself.... full review

So-So, by JOGINDER TUTEJA, Planet Bollywood : ...Watch it for a lazy outing and the performances of practically the entire cast which lifts even an ordinary scene, but don’t expect much uplifting or humorous moments here.... full review

So-So, by Priyanka Roy, The Telegraph : ...Pagglait may falter every now and then in execution, but has its heart in the right place. Writer Anne Roiphe once said, “Grief is in two parts. First is the loss. The second is the remaking of life”. Sandhya may not feel the former in the way society dictates it should, but she aces the latter in the way every woman should.... full review

Thumbs down, by Nandini Ramnath, Scroll.in : ...Sandhya’s emotional arc has immense potential. Her journey from eye-rolling indifference to moist-eyed empathy is unconventional by any standards. Shoehorned into a family where she barely belongs, Sandhya chooses an inopportune moment to pull herself by her bootstraps. But she is underserviced by the movie’s shifting tonality between cynicism with poignancy.... full review

Dear Meetu. Thanks for writing a review. After a long time.. and nice to read it...

Thanks, I hope to be more regular. *Fingers crossed*

I want you to review Ajeeb Dastaans (Netflix) - if you can... please share your review..!