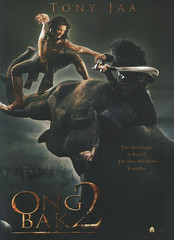 Tony Jaa is back and this time it isn’t just Muay Thai that he is got to offer!

We have heard martial arts aficionados lamenting long and hard for years that all their great heroes have vanished. The Boss, Bruce Lee, died years ago, and Jean Claude Van Damme and Steven Seagal who lit up the screens briefly in the late eighties have long sunk into oblivion. The scene in the East is none too encouraging either, Jackie Chan and Jet Li are ageing and showing it, so is there an action hero out there, to win our hearts and strike fear into the enemy?

Yes, dear fans, do not despair, all is not lost yet.

Tony Jaa detonated onto screens around six years ago with Ong Bak, where he showcased the particularly brutal Muay Thai style of kickboxing. This was the real thing, no wires, no CGI, no bullshit. Produced on a shoe string budget, Ong Bak and Tony Jaa went on to carve out their rightful seat in the martial arts pantheon. Tony Jaa is back this summer with Ong Bak 2 and this time he is clear about what he wants, he wants nothing more than to be known as “The Action Hero”.

The film opens with a spectacular sequence featuring a crocodile, a Cyclops like bruiser, spurting arteries, and barbarous weapons. What more could a viewer ask for? The pace is set and the ride then blasts off.

Amongst all the action sequences, the director does make an attempt to tell a story. The story has the familiar motives of revenge and retribution and the telling does plod in parts. The sequence of events unfolds through a circular back story where the past catches up with the present. The director has thrown in a few “reflective” moments, which seem designed more for the viewer to remind himself / herself that he / she is still breathing after witnessing all the carnage onscreen. A brooding, long haired Tony Jaa stalks most agilely through the film and very wisely utters not more than a few lines of dialogue throughout. His large, luminous eyes, do manage to convey a degree of suffering and give a hint of the inner tortured soul that his character possesses.

So what does Tony do in the film? Well, he does everything there is and more. He tames and rides wild elephants, displays his mastery of various martial arts styles including Japanese sword fighting and kung fu, dances a traditional Thai dance, and even has a romantic interest. The romance is fleeting and only hinted at in a couple of scenes. There is a spectacular fight at the end which just goes on and on with Tony fighting one masked black clad opponent after another. There is also a beautifully choreographed fight set amidst, what else, but a live elephant’s tusks, what will we have next! The ending is abrupt and unclear; after all the fighting the film just sort of blanks out.

Tony has the moves no doubt, he is fast, he is supple, and he has the power. In one scene he pays tribute to Jackie Chan, as he pounds the villains when drunk, in another, he fights with a three sectioned staff, a tribute to Bruce Lee and his whirling nunchaku.

This film is lavishly mounted as compared to its predecessor, but suffers due to its length. The length seems to have been purely for the purpose of making sure that the viewer gets to see Tony do his stunts and fights in different contexts and in different styles. Sometimes it palls, but Tony’s intensity carries it through. The fights are bloody and savage with no quarter asked and none given.

Martial arts fans; make sure you see it.

Tiang played by Tony Jaa seeks revenge on the persons who wronged his family.

All the ruffians including Tony have black and discolored teeth; this is very realistic as the film is set in the past.

Wasn't too impressed with the action, even if I overlook the lack of a coherent story