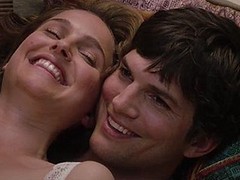 A rom-com predictable down to the credits. Adam and Emma decide to get into a relationship with ‘no strings attached’, which means they won’t bind themselves to the general code of conduct which goes along with a relationship. While the casualness of such an association is postulate, there always comes a time when one of them gives in to love.

No Strings Attached is an expression for a casual relationship between Adam and Emma with some established ground rules – no attachments, no jealously, no lying, no flowers. Life is fun until they start to actually enjoy time with each other. It answers the 'not so mind-blowing question' – can they stay without falling in love?

The characters have been played very well, both by Ashton Kutcher (Adam) and Natalie Portman (Emma). I thought Portman was a very serious actor. But she pulls off a girl next door role (and a tough one at that) in this film very well. After seeing her play something so intense, something so critical in Black Swan, it is a pleasant surprise to see her play a part so simple and regular where she smiles to the fullest and dreams like any other girl. Emma is busy pursuing a medical career and wants to live a life without any liabilities. She doesn’t want to get into a relationship that demands too much time or emotional energy. In a couple of places, though, she blew the emotion off completely. But given her acting capabilities, I'll blame the direction for it.

Kutcher, on the other hand, is the same that he was in almost all his romantic films. I absolutely love his part as Kelso (That 70’s Show rocks, man!), and therefore it feels unnatural to see Kutcher act so normal. He somehow flows really well into a handsome guy, who is charming, with a good sense of humor, who lives life to the fullest, and doesn’t expect much from anybody. These guys get together, and obviously… life happens.

The story goes from fast and unsurprising in the first half to slow and unsurprising in the second, and yet isn’t all that boring. . The film lies somewhere between a chick flick and a rom-com. Though the dialogues are funny, many of them are in the trailer. Of course, it is predictable to the last dialogue, but there is always the chance that you notice things other than the story. For example the architecture of Adam’s house, the beautiful dress that Portman wears for her date, the funny period mix that Adam makes for Emma. All the supporting characters did fairly convincible jobs and deserve praise too. I especially liked Lake Bell, who plays Adam’s colleague, strong by herself but still almost in love with him.

No Strings Attached is sweet and affectionate, but not a must watch. Oh and the last bit which goes without saying – lots of suggestive romance scenes, so avoid watching with family.

Yay! Thumbs Up, by giethimdun : Funny and Entertaining

A portrayal of fantasy relation and then reality kicks in. I like the director's treatment with supporting cast. Each person left a mark on the movie. Sweet. Some might want to watch it just for the Kutcher nudity galore ;-)