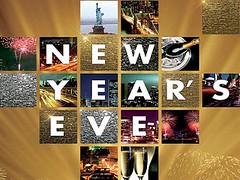 There’s a scene in the film where a gynecologist removes DVDs of Valentine’s Day (Another film by director Gary Marshall) the movie, from her patient’s um, lower parts, as to comically pretend it’s a baby. Really? That’s your idea of a Romantic Comedy? Oh and yes, this line is exactly what will be going through your mind through the film. So a film named New Year’s Eve, from a guy who directed an anti-rom com that turned into a rom com called Valentine’s Day, is also about the pressure of New Year’s Eve day. Except, the film propagates hope, love and fresh beginnings. No surprise there.

Okay, I’m going to try and come up with a cooler idiom for ‘Too many cooks spoil the broth’. Let’s see. How about, too many celebrities (actors) can turn a “movie” into a greeting card. Yep, that’s pretty much New Year’s Eve for you – Every recollect-able, sellable face that you can imagine, thrown into a clichéd, predictable movie about the commercial and consumerist idea of New Year’s Eve.

New Year’s Eve is a movie about various characters and their separate experiences with New Year’s Eve day. You have Ashton Kutcher and Lea Michelle (of Glee fame) who get stuck in an elevator. Kutcher’s anti-New Year’s eve feelings gets converted when Michelle, who’s a backup singer makes him realize how everyone has their hopes pinned on one day to start over fresh.

Robert DeNiro is dying, and his last wish is to watch the ball-drop (a Times Square tradition) this eve. But the hospital’s policy doesn’t allow him to move from his bed. Michelle Pfeiffer is stuck in a dull, thankless job, when with the help of Zac Efron, she spends a day fulfilling all her desires. Katherine Heigl meets Jon Bon Jovi at a dinner that she is catering for, as he’s performing as Rockstar Jensen. They struggle to keep their past feelings at bay.

Sarah Jessica Parker plays protective mother to Abigail Breslin (of Little Miss Sunshine fame) but they resolve their issues to let love and hope overcome everything. It is followed by that “uplifting” background music that is meant to make you abandon all your cynicism. You know, peppy pianos, a litte hip-hop and ofcourse, they HAD to end the film with ‘What a Wonderful World’.

I think the biggest issue with New Year’s Eve is the screenwriter’s (Katherine Fugate) inability to connect with the characters. Having multiple mini-stories works only when you can slowly unfold each, and let the viewers live the stories. The makers are so obsessed, with packaging a commercial commodity, and putting in everything remotely sellable (Zac Efron for instance, after his High School musical fame), I’m surprised the Twilight cast isn’t involved in the film.

New Year’s Eve has some light moments though. Pfeiffer is adorable as a reserved middle-aged woman who gets genuine joy from doing things she never imagined. Halle Berry is hot as always, and she’s the one person in the whole film who doesn’t overact.

It’s sort of tiring to place almost every light-hearted film that “Hollywood” churns out, into the kind of movie you’d want to breeze through while flipping channels. New Year’s Eve is a clichéd film that wants to believe it has perfected the formula of making money at the box office. Sigh, just watch Love Actually if you’re in the mood for hope, love and more such holiday positivity.

Nay! Thumbs Down, by GlassMan