An aching reminder of how the little things in life matter so much, Alexander Payne's Academy Award-nominated Nebraska is a gently humorous and stirringly simple journey, anchored by at least two terrific performances.

Time is strange, that way. It waits for no one, but it also always catches up with you. When it does, you're usually left rueing the past or dreading the future.

In Alexander Payne's unhurried, warm Nebraska, an old man with a shaky past, a bleak future and questionable mental abilities has his heart set on a wild goose chase - a supposed windfall that he's sure of - which will take him from Montana to Nebraska. Stubborn and unrelenting as he is, one of his two sons decides to humour him and take him along, because he just doesn't know how long his father will live anyway.

There is such joy in seeing a filmmaker who knows his characters and their stories so well, that he sees no need to push things and make them happen. Nebraska is funny, slow, gentle and moving. It explores so many different kinds of relationships in a family, as well in the extended family. 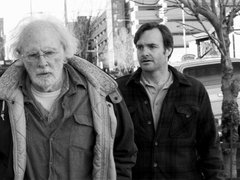 The most endearing among them is that of father and son. David, the son, has personal problems as well, but he puts it all on the side to concentrate on his father. The father, a brash, near-senile old fellow with a drinking problem, doesn't give much to make you like him. Yet, the sight of his son doing so much for his father never once strikes a false note; because you can see that on some level he's terrified at the thought of his own old age, when it sets upon him.

Also, since the film is largely set in a small town called Hawthorne in Nebraska, it also has some genuinely insightful moments that show how a sleepy, close-knit town is almost like one gigantic joint family, unlike in large cities where you're alone even if you're in a crowd. Shot in gorgeous black-and-white and with a folksy soundtrack as company, the film exudes a charm that harks back to the days of old.

Like in his previous film The Descendants, Alexander Payne seems to have this wonderful quality of creating memorable scenes in the unlikeliest of settings. In Nebraska, watch out for a few of them set in places you'd least expect - a cemetary, for example.

Veteran actor Bruce Dern, in his Oscar-nominated turn as the father Woody in Nebraska, is quite terrific. He has to alternately display spurts of comprehension with stretches of being lost, and he does it so convincingly. He also almost always has you interested in the reason he wants to visit Nebraska in the first place, despite everyone close to him telling him that he's off his rocker.

However, despite Bruce Dern walking away with nominations and accolades for this one, the film is actually shouldered almost entirely by Will Forte, who plays David. The film is essentially David's story; the graph, the growth, the resolution, they're all his. Reminiscent, strangely, of a young Quentin Tarantino, Forte's straight face as he tackles some complex scenes may have been the reason why it may appear that he hasn't put in as much as Dern, but fact is that Forte holds the film together. His is a severely underrated performance.

As the journey of the film unspools itself gently, you find yourself not knowing whether to smile or feel sorry for Woody and David. Eventually, though, despite the note the film ends on sticking out a wee bit from the rest of the film, the unsaid feelings of love and respect they have for each other hit home. You're left feeling that, for all of us, there is still hope.

Yay! Thumbs Up, by Anup : Simplicity at its best

This was a great feel good movie with dry humor which make sure the movie doesn't become a boring journey.....Not a single actor was known to me before watching this,,,,but now i will look forward to there upcoming films.....Also this was the first movie of Payne the director of whom i become a fan now for showing simplicity in such a beautiful manner.. Other two of his movies SIDEWAY and THE DESCENDENT are on my list now.....
The only thing which i don't like of it is its Black and White treatment.....The movie looks ancient ,, any other colour like Yellowish ,, or greenish or blueish treatment could have made the movie little rich.....
The starting 15 mins i felt totally bored but after that the way it shows how the fatjer - son relationship evolved ,, its just heart warming

Anup has given this movie a Yay! Thumbs Up(Simplicity at its best). Anup has posted 437 comments and has rated 108 movies. See Anup's page for more details.