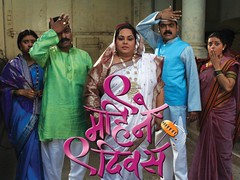 Has about 9 hearty laughs too. Rest of it, though, is pretty much slapstick & far away from believable

Nau Mahine Nau Divas can easily be slotted in the category of mindless comedy stringed together with a plot. Some of the gags and the timing with which they are delivered bring uncontrollable laughter. The flip side is that it is brutally loud throughout and gets into slapstick mode way too often for my taste. Other than the comic tone maintained through the film, there's nothing much happening in the film story-wise.

The entire film is sort-of a chase sequence. A basic lie is told. When it risks being discovered buffoonery covers it up with of course another lie. The cumulative lies are at the verge of being discovered. And the cycle repeats till the climax where the most unbelievable aspect of human behavior is explored.

Despite the sexual references and all the trying-to-get-pregnant related jokes, the film treats its women with a lot of respect. They are strong, influential albeit one-dimensional characters. But the one-dimensionality again is not reserved for the women. The entire film focuses hard on making you laugh hard, character development isn't even remotely on its agenda.

Anyway, it ain't fair to complain about proximity to reality when that is clearly kept at a distance while writing the film. Let's just say I cannot like films like these in entirety but I thoroughly enjoy some of the episodes. There are spurts of hilarious scenes in between overbearing, over-the-top dramatics. There are also a couple of scenes which are really funny only that the punch line comes a second of two late and thus you end-up laughing before the joke comes about. But, at least you laughed, right?

There's this one sequence where Deshmukh tai and her son are sort-of playing Charades to communicate with each other. The perfect synch with which the characters were interacting shows the amount of time spent on rehearsals.

In general, the comic timing of the women in the film was pretty out of the ordinary. At the risk of stereotyping I must say there aren't too many women who can do comedy well and the women in nau mahine nau divas have managed that.

But good scenes are few and far between. And there are just way too many ridiculous loopholes that make the film look silly rather than funny.

Mrs. Deshmukh needs an heir to her ancestral property. Only that her family is cursed to be childless for seven generations and they have been adopting a son generation after generation. This time she is determined not to let her adopted son adopt a child.

There are loads and loads of unanswered questions which could be pointed out as loopholes in the film. This is one of those films in which each scene is a continuity jerk in terms of story-line.