A beautifully filmed socio-political drama sans narrative thrills. Let down by its writing choices, this surprisingly sincere effort leaves you disgruntled in the end.

Shyam Jagdale. What a name for a political journalist to begin with! Its intensity grabs me straight off. But, what could make me stay with him is the enormity of the political games he is made to watch silently. Such a nightmarish situation could surely drag his downright honesty into an uphill task. More so, his battle of ideologies and principles are bound to bring inevitable struggles, unpredictable developments and, obviously, spine-chilling rides. Whether he succeeds or not, I am more concerned about his approach leading up to the end. Nagrik intends to tackle this with virtually non-existent drama at the start. And I am glad it opts to do so. Having said that, it heavily relies on extrinsic emotions through excessively-served, revealing dialogue. This slays the joy of exploring certain events on your own.

Lighting is mostly spectacular, so is the camerawork. With its vivacious visual treatment, Nagrik seeks to uncover the underbelly of Bombay drowned in the world of dirty politics. Such is its symbolic detailing that scores of visuals themselves speak volumes. Yet, the makers feed you words which add no weight to the ongoing action. There is an unwanted urge to tell you every tiny detail. Instead of desperately reciting someone’s gruesome past or someone’s looming future, they could have let you figure it out. It could probably take you a while to grasp, but it would keep you engrossed. This and the story development, hinders Nagrik's potential to be a well-made, socio-political conspiracy.

Shyam resonates as a strong, fearless journalist. He knows his abilities, and Sachin Khedekar adds to the believability. But something feels wrong seeing him break down at the escalating nexus between politicians, industrialists and media. Given the character of his stature and experience, it should not come as a surprise to him. And having known his limitations in such a setup very well, his agitation lacks significance. This reminds me of Nilu Phule’s inane crumbling in Sinhasan – another elaborate, but lame political drama. Both acts leave me baffled for the changes they undergo. 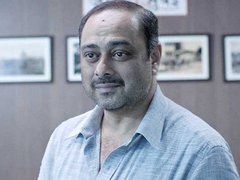 Hindu-Muslim tensions inarguably possess enough material for a dramatic narrative. But here, it’s just another layer within the story. Nagrik’s minimalistic outline gives very little or no scope to drama – a rare and bold decision. What counts from here on are eventful moments. Implicating certain politicians doesn’t offer any solution to the worsening conditions of the city, the state or the country for that matter – something Shyam is well aware of. The story does draw you closer to varied social issues through him. But by being preachy about them, the desired outcome goes amiss.

Rarely does a Marathi film sound wonderful. I felt stranded in rain as a scene hovered before my eyes. That’s the oomph factor of its sound mixing. And then Sambhaji Bhagat's poignant verses help Nagrik reach an entirely new height. “Manoos Marala” – which he wrote after the 1993 Bombay Riots – is adopted and observes women’s viewpoint towards the massacre. I am swept over as it goes on to remonstrate our way of living. It’s indeed an exemplary feather to the narration.

All actors perform to the best of their ability, even with little screen time. Devika Daftardar looks close to reality like any other actor, only until a revelation is made. I wish I could assert a fundamental flaw in her hair, among other, had it not led to divulging a subplot. But it shouldn’t cause you to spurn the film which is worthy of praise, even with its inadequacies.