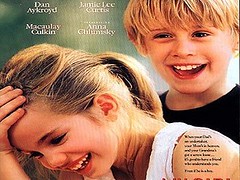 My Girl is a film about friendship – not just with your childhood best friend or with your most prized possession but with the many forgotten, yet significant people who you met when you were younger and contributed to your personality and most of all with a younger, more innocent "You" – who is the foundation of what you are today.

Most women I know have admitted to hating or being scared at the thought of having children. It’s surprising actually; they’re all killing the cliché about women loving babies. Even so, you’ll usually see people fawning over infants, children below the age of 7 or 8. Let’s face it, when was the last time you heard someone say, “OMG, I met the most adorable 11 year old!”?

In Howard Zeif’s My Girl, however, you end up feeling a surging love for the two lead 11-year olds, Vada (Anna Clumsky) and Thomas J (Macaulay Culkin, yes the Home Alone kid). My Girl is a story about two kids and their innocent, starry-eyed lives as they move through life’s offerings.

Vada is a hypochondriac attention seeker – typical pre-teen, who feels like the world’s coming to an end because her father, who owns a funeral parlour, has found new-found love in his make-up artist (Jamie Lee Curtis). She confides her crazy theories, intellectual rants and thoughts in Thomas J, her only friend.

The setting is very "The Wonder Years" like; both kids face the regular troubles of a pre-teenage; You can sense a deep, deep friendship between the two – one they might not even be aware of. He claims Vada is his girl (via a more mature voiceover that gages the film) – and that’s how you can see exactly why the movie is called so.

Vada’s father (Dan Ackroyd) is a typical sitcom father –one who instills enough into Vada but is ignorant of her needs and questions. It’s her relationship with her father, and her fears that leads to her personality – one of questions, admirations, astonishments and an endearing naiveté. Jamie Lee Curtis as Shelly is smart and appealing – it’s through her that we realize Vada’s issues with her father and relationships in general.

The beauty of My Girl is the ability to see the two characters in a pure coming-of-age story. You often want to just make them sit in front of you with cookies and milk, and you want to talk to them. Tell them how lucky they are to be that young, and innocent, free from opinions and pressures. When the film gets over, you’ve lived an entire circle with the characters, and you’ll be left wishing there was more.

Vada’s relationship with the other characters in the film is remarkably told. She and her father share a very on-off, negligible relationship, and it’s a refreshing change to see a father-daughter relationship that isn’t either abusive or saccharine sweet. Vada’s teacher Mr Bixler (Griffin Dunne) is sensitive and very profound in his ability to invoke the wondrous thoughts in Vada.

The background score includes many classic-cult hits from the time (the movie’s set in 1972). It’s like a full-blown emotional nostalgic trip, the film. The DVD of My Girl has no extra features but here’s why you should buy it. As a child there are many questions that are left unanswered – some your parents want you to figure on your own, some you overhear and some you just never understand.

My Girl doesn’t set out to answer them – it just allows you to enjoy the unanswered, free-spirited and naïve childhood everyone should have.