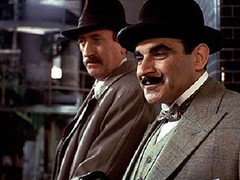 The Murder of Roger Ackroyd

There are very few detective novels that ensure you vividly remember the endings. The Murder of Roger Ackroyd is one such novel, which will never let you forget the narrative if you manage to read the book. The movie adaptation is detailed, earnest, classy and a nail-bitter, all the ingredients needed to be successful detective film. Ultimately, the book is a much more interesting experience than the movie, but don’t make the mistake of missing the DVD which is one of the most genuine adaptations I’ve seen, managing to retain the complex flavours of the book.

Over the years, and multiple adaptations later, I have always found myself on the side of books in the book versus film debate. This holds true especially for the Harry Potter Series, The Lord of the Ring Series and the Dan Brown books. However, British detective fiction adaptations are slightly different.

The Bond movies are a separate entity from the books – with the suave style and dramatization of the character of Bond, and the picturesque visuals that the movies incorporate. Which is why a debate surrounding a DVD series of Christie’s The Murder Of Roger Ackroyd seemed like it would transgress mere extremes.

BBC in collaboration with Carnival Films and ITV have been dramatizing Agatha Christie’s Poirot series since 1989, but if there is one DVD that a Christie reader should want to pick up it would be The Murder Of Roger Ackroyd.

The Murder Of Roger Ackroyd deals with a series of murders in the quite English countryside, King’s Abbot, where Poirot had decided to retire. It starts with the murder of a wealthy businessman Ashley Ferrers, followed by the suicide of his wife, Dorothy Ferrers and then finally, her lover Roger Ackroyd, whose murder seems to be most peculiar. Poirot finds that the people around the victims are hiding much about their lives, and this forces him out of his retirement.

The Murder Of Roger Ackroyd has a romantic, serene picture and an old world charm to it – much like the language that the book uses. Christopher Gunning uses the violins as background music as a perfect blend to the calm flow and appeal of the narrative, but halfway through the movie you are slapped with an increasing pace of anxiousness. The movie carefully carves out that build up, which makes the film an interesting piece of detective fiction in isolation.

A book like The Murder of Roger Ackroyd is multifaceted, deceptive and experimental – yet if one were to adapt it to a movie, there is only one-way to do it. The film has taken that route of transforming a 2-dimensional convoluted narrative, which determines the literary complexities of the structure into an easily narrated film.

Poirot plays the part of merely a detective in the book, but in the film he becomes the central narrator. After watching one film, you want to go buy all the movies in the series, because you are left curious about the intricacies of the adaptations, and that is why this DVD series is such a delight – almost like a double treat. A near perfect adaptation of one of Christie’s most complicated novels and a detailed, classy who-dun-nit for those of you who haven’t read the book.

Moreover, David Suchet is Poirot. The details are perfect in The Murder Of Roger Ackroyd , and other movies in the series. You’ll notice Poirot is exactly what you would have imagined him to be after reading Christie’s novels: quirky, observant, witty and unimaginably intelligent. Poirot is a typical detective, finding out the murderer before anyone can put together the pieces of the murders. Keenly observant of the smallest details and not willing to abandon even the most negligible clues.

Having placed all the cards of this film on the table, it becomes essential to point out that no matter how well The Murder Of Roger Ackroyd is adapted – which it is – there is nearly nothing like reading the book. It’s a separate experience of jaw-dropping exhilaration.

Watching the movie on the other hand is like assuming the position of an all-knowing parent – who knows the value of original but wants to applaud the courage of an earnest and striking visual adaptation. The debate has the same conclusion but watching The Murder Of Roger Ackroyd will make you feel like it’s a win-win situation.

Yay! Thumbs Up, by FilmPuff

Yay! Thumbs Up, by jitaditya

Yay! Thumbs Up, by Shuchita

As a huge Christie fan, the movie is nothing like the original. However it IS entertaining and I couldn't imagine anyone nut Suchet for the part. It's the part he was born to do.

FilmPuff has given this movie a Yay! Thumbs Up. FilmPuff has posted 1 comments and has rated 1 movies. See FilmPuff's page for more details.
Jitaditya

David Suchet is the definitive Poirot... AFter watching almost all of his works I tried watching an older film with another actor as Poirot but couldn't finish that...

It is true that the makers of this series makes certain changes in teh original storyline but nevetheless, meticulous attention to period details and excellent production values make it one of teh best serieses ever.... Personally I even like the recurring side characters like Hastings, Inspector Japp & Ms Lemon...

jitaditya has given this movie a Yay! Thumbs Up. jitaditya has posted 34 comments and has rated 9 movies. See jitaditya's page for more details.
Swetha

@Ilovebooks: I'm assuming you have read The Murder Of Roger Ackroyd (because if you haven't your comment stands invalid), and anybody who has read the book will agree that as a narrative structure it defies the very norms of story-telling and novel writing.

That, my friend, is a complex piece of literature, hence the tag.

I would comment further but that would give away the beauty of the book.

I would assume that you understand the workings of story-telling and the role of a narrator? Keeping that in mind, I feel the structure of the novel is complex and avant garde. Maybe we can have a detailed conversation about that later, where I can openly tell you what I mean incase you are confused.