All the intended pun lies in its catchy title and dialogue with drab scenes. Straight out of the Marathi comedy films from the 80s, Murder Mestri boasts of an ill-conceived idea that drives superficial performances. Obviously, it leaves the movie wounded within.

The lone reason this appallingly-rookie writing is seeing the light of day is because of its catchy title. Sure, we have umpteen numbers of such cases, but Murder Mestri could well be unlike any other in the pack. Not because it is fused with technical prowess or it brags of a top-notch cast; but because it is deceiving – not just in its entirety, but in distinct pieces as well. Visual gimmicks and flashy camerawork deceive you. Superficial acts deceive you. Witty chatter in bad-tempered situations deceives you. Erroneous plots, which choke the narrative after a point, deceive you. An idea that sails under false colours deceives you. And so does the title.

What the internet does today is what postcards could well have done in the 80s, letting people spy on others. So a postman, with unrestrained access to one’s personal life, could have his hands on a good-natured or a conflicting story to tell. While both can be equally rewarding, we here have a do-gooder whose peculiar tendency to read others’ letters affect the characters involved. Though this one-line premise indeed has some potential, the story hits a snag without any solid development in the plot. Halfway into the film, the focus shifts from this postman to the Mestris. If he is no longer driving the story, there is no mystery left for him to unravel. Never mind the story, just enjoy the jokes – goes the general saying. But as it turns out, it’s not a laugh riot either.

As with any other sloppy picture, Murder Mestri too bites the dust as a result of its reckless script. Many a time, in fact almost every time, our comedies are built on one-liners alone and not the plot. This movie, so to speak, has nothing of its own to propose here. No wonder it adopts the age-old path blindly. And not being a meagre sitcom, it springs into something which it is not underneath, a thriller. 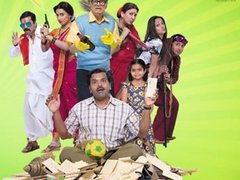 Camera can be deluding as it is for this film. Images are lit and picturised well, but that alone can’t sum up its true motive. You are creating comedy through thrilling events, fine. But your camera just doesn’t get close to characters in order to make that happen. Therefore steps in western-inspired, noirish soundtracks to perk up your excitement. That’s another gimmick ill-used to fill the void left by directional mishaps. But, how far will it go to cover up non-technical aspects? Not that DP-director Rahul Jadhav is naive to set his camera right, but his incognizance with the subject costs the film dearly. He, along with the writers, do get certain elements right, but they are very few and far between.

More often than not, Marathi films refuse to cast away their theatrical roots. And just because your story is conveniently set in the 80s or 90s, you can’t get away with film characters of that era. Appallingly, our makers are still stuck in the rhyme game to generate humour. As films set around Konkan have in common, Murder Mestri’s dialect sounds dubious to a point where I would’ve preferred it sans Malvani. And the language goes back and forth from Marathi as per the writers’ ease.

I don’t remember a well-made Marathi comedy with brilliantly-shaped characters. Because nobody takes that extra effort. That’s also the reason why our great performers largely look forged, the problem Murder Mestri too is plagued with. The reason behind the postman’s act, for instance, is lame. Dilip Prabhavalkar’s rib-tickling act seemed to be the only thing I found engaging. But again, his part is not too different from his earlier comic capers. Let alone the pun on the genre, Murder Mestri is not a murder mystery in the first place. It’s a murder of writing and everything related.