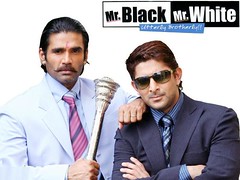 NOT A REVIEW - a look into the look and feel of the release this week.

Yet another week with a slapstick comedy(?) to entertain us. Okay-okay, how can I slot it into a genre without watching it? So let's just say the promos, the official site and the plot synopsis all are slapstick-ish.

So, we have two friends, one of whom is trying to avoid the other. One of them is a simpleton, the other a conman. And of course, we have irresistible diamonds as the supporting cast. Irresistible both because they are diamonds and seems like no plot line is complete without them or crores of rupees.

The director's past record includes Baaghi and Julie which I remember categorizing "not bad" when I saw them. He was also an assistant on Who Saat Din. Haven't seen any of his other work, but this with Arshad Warsi's comic timing could be good enough to make it worth a watch.

I'm drawing a blank. There are some movies after which you draw a blank because they’ve left you spellbound. You don't know how to express the exhilaration you feel. Isn't it strange that you draw the same blank for movies that leave you numb. You are left listless after watching the random crap and have no clue what to do next. Just in case you haven't guessed it yet, Mr. Whilte Mr. Black does the latter.

So, here I am, absolutely listless and numb in the head, don't know where to begin. I tried the usual - mention major positives first...genuine blank...true, there are a few things in the beginning that were "not bad". Like in the opening action sequence, the stunts and special effects are slick. But, the badly painted yellow car and the shoddy overuse of the blue tinge are extremely distracting.

Then, I like the way we are introduced to the characters - no voiceover, no title cards, just plain episodes. What the characters are going through, defines them for us. But, the characters are so not interesting. I thought the days of having characters forced into the story with the sole function of playing comic relief were long gone. I guess I'm mistaken.

The three women who are stylishly kicking men around in the opening sequence have no character sketch at all. They are just clones of each other. They have no dialogues, they enter-exit-reenter-reexit randomly. They haven't even bothered giving these women names. When the writer himself is hell bent upon belittling his characters, what story/character arc are we going to find? And exactly how often are we supposed to leave our proverbial brain behind?

Now, when those are the positives, am I to be blamed, if I just feel like writing a one-word review, "BAD"? What more can I be expected to say when Arshad Warsi, of all the people is so loud that you feel like having the usher mute the volume?

For me, Suniel Shetty never worked as a simpleton. Somehow, his image and demeanor don't have anything village-like about them. So, if my problems start with casting itself, the list of things to complain about is just too long. Don't I need to be convinced there is a determining factor behind casting those particular six women, other than that they were ready to bare all?

The music is as kitschy-90-ish as could be, and the lyrics are extremely generic. In fact, I think one of the songs almost worked as a lullaby for me. And I don't know where to look, if the idea of entertainment is taking a crane top-down shot of a swimming-trunk-clad Arshad Warsi lying down and doing the weirdest hand and leg movements (supposedly seductive(?))? And this surrounded by 50+ women wearing bikinis who are doing similar movements. And yeah, all of them are on striped beach towels. Very disturbing visually, believe me.

So, yeah, I think I've said enough where one word would have sufficed. In the interest of brevity and saving both your time and mine, I would just say, get your "to watch" list out and watch a few of the movies on that list this weekend.

So-So, by Ameeta Gupta, Rediff : ...Arshad Warsi is in his element here, and steals the show... full review

Thumbs down, by Martin D'souza, Glamsham.com : ...Taking the audience for a ride is one thing, taking them to be complete fools is adding insult to injury... full review

Thumbs down, by Khalid Mohamed, Hindustan Times : ...Just in case, you’re curious to know what Suniel Shetty and Arshad Warsi are up to, please be warned that even they don’t seem to know what they’re doing... full review

Thumbs down, by Taran Adarsh, IndiaFM : ...half-baked fare that tries too hard to entertain, but fails.... full review

Thumbs down, Movie Talkies : ...It is sad to see an actor like Arshad Warsi wasted in a role like this... full review

Thumbs down, by Hanumant Bhansali, Radio Sargam : ...the smarter lot of audience can survive the wrath of losing their cool over this film while the front seaters may enjoy a few moments in the film... full review

Ok, I'll try my best here, because the basic premise of the movie has not been explained at all. So, Gopi (Suniel Shetty), a simpleton from a small village is in Goa looking for Kishan (Arshwad Warsi) who is supposed to be a conman. Why? Your guess is as good as mine (yep, even after I've seen the movie!)

Poor girl! wouldn't be surprised if u went to a psychiatrist for counselling. Tashan and this movie one after the other! I know ull feel like it, but pl dont do something drastic :)

Thanks for the sympathies, Sudhir! Worry not, at least not yet, i'm hanging in there.

On a side note, people call me a masochist, but i maintain that i thoroughly enjoy ripping apart the movies i don't like. Though I think in this one the despair is just too obvious. Oh well...