Moods of Crime will make you uncomfortable with its audacity. The story would've had an even better grip if the film were finer in other aspects.

Moods of Crime is a bold film. Not because of its explicit sexual content and language thereof. But because it pushes the envelop for the genre, especially in Hindi films. It is worth a watch for being a genuine psychological thriller. Unfortunately, there are other aspects that hold the film back.

The film doesn't have the usual trappings of a thriller – for example, no loud background music to guide you to the edge of your seat. Eerie silence in the background with plain dialogue does the trick. Of course, this could've been more out of necessity than choice owing to budget constraints. But, silence always spooked me more than violins and percussion as cue.

Of course, you cannot grant a movie points for what it hasn't done or what it was supposed to do anyway. The plot with two criminal psychology students getting into the shoes of a criminal quite literally is intriguing by itself. The details of how they go about it - their intellectual progress from one crime to another, their moral and ethical deterioration from one crime to the next, and how each one of them handles both – makes the film worth a watch. 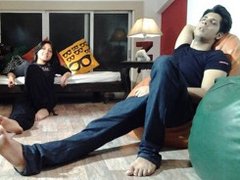 A non-linear story becomes an engaging thriller when it gets its timing right. The point in the story at which the film starts, the rhythm of the back and forth, the peak when the big reveal comes all contribute to whether or not the story works. Though Moods of Crime gets all of this right, it has a story that would have worked even without the gimmickry of disjointed narration.

There are other things too, that are just about bearable about the film. I would have said one of the major problem areas is the performances by one and all. But, at a closer look, the acting is not affected, it is the dubbing that completely gives way. So, it's not that Ayaz Ahmed and Anima Pagare (the students) are expressionless. In fact, they convey their angst and confidence, their childlike enthusiasm and frustration. However, the moment they say a dialogue, you are distracted and annoyed. Anima becomes shrill and Ayaz seems disoriented. As the end credits roll, you realise their voices were dubbed by others. Also, the teacher, Uppekha Jain (the teacher) doesn't seem to know what to do with her accent – should she hide it or flaunt it?

Fortunately, some of the dialogue is straightforward and works well. But at other times, it comes across as an attempt to seem authentic with jargon from psychology. In fact, for a long time into the film it feels like it wants to be a lesson in criminal psychology. When you realise later that it wanted to be a psychological thriller, plain and simple.

Despite being bogged down by important elements that make a film, Moods of Crime holds through because of its writing. It manages to make you uncomfortable not only by its unabashed language but also because of the thought process of its protagonist(s) and the shudder down the spine they bring.

Disclaimer: The film's director is a friend's brother.

Thumbs down, Free Press Journal : ...Constructed to mislead, this film tries to play smart but comes out as foolish. The young couple die at the end and the explanation given is a little too trick happy and conspicuously unconvincing. There are no thrills here. The acting is put on and the treatment has little guile worthy enough to draw the interest of the viewer. Such is the nature of the desi genre beast these days. ... full review

Thumbs down, by Oohar Basu, Times of India : ...In its 115 minutes' runtime, the film feels longer than it should. The ending is simplistic, almost laughable. It is a pointless movie that reiterates how important crisp direction could prove for a thriller. ... full review

Want to Watch, by Fan

I had never heard of the film. Thanks to Wogma and the review, I know of it and very likely to watch it on dvd/tv.

The promo video that is posted above is quite gripping, and the premise of the film (wherein the title tells you what it is all about) is a very interesting and never tried concept.

My issue, as with any new film, is with the explicit sexual scenes. I cannot even imagine how could they be so important to the film's story to merit an inclusion. For that matter, I have yet to come across even a single film where sexual exhibition and kissings are an essential part of the film's story in the absence of which the film could not move ahead. They are just meant to attract some more footfalls - a gimmick that is unnecessary if the director has a good story to tell.

@Fan Well, the sexual content in this film is quite matter-of-factly, which is why I guess it becomes uncomfortable too. We are not used to it. Also, some bits really push the envelope in terms of the concept itself. So, I don't know if you will like the film or not.