The film takes its time to establish the motives and modus operandi, which is good but somewhere in its thoroughness and detailing the thrill gets compromised.

Continuing my exploration of Hindi indie films on Netflix, I spotted this film called Moh Maya Money. At first, I was a bit indecisive about watching it because the title sounded dated. However, the casting was superb and unprecedented--chic Neha Dhupia and scheming Ranvir Shorey, playing a couple. Their pairing reminded me of the odd but much-liked pairing of Mallika Sherawat and Rahul Bose in Pyar ke Side Effects (2006). So, I gave in.

Shorey and Dhupia make a great on-screen couple. However, for the longest, I kept wondering why there wasn't any physical chemistry between the two...it could have caused the screen to sizzle. But while I wanted the sparks to fly, the screenplay almost deliberately avoided physical closeness between the two. Later in the film, all of this is in-a-way justified, which comes as a big reveal.

But let me clarify, the word big is relative to the scale of surprises, the twists and turns in the film, which for the longest are quite basic. An illegal deal goes messy. The couple gets pulled into the vortex of consequences. Must find a way to get out. As time runs out, dire choices have to be made.

Thrilling (albeit stale) as it may sound, the film takes its time to establish the motives and modus operandi, which is good but somewhere in its thoroughness and detailing the thrill gets compromised (even with non-linear narrative structure), until it all gets really complex and a new character, played by the talented Vidushi Mehra, comes into the picture.

She finally brings out the desperation that we expected the lead pair to somehow express. The film still lacks in thrill but that void gets filled up with drama, which is a relief because it imparts the much needed 'plot thickens' feel to a relatively stoic screenplay. And from that point on the film gets better, leading you to an end that leaves you thinking about the events. 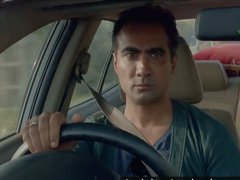 And that's precisely why I am writing this review. I haven't been able to stop thinking about the film.

Should we call it a success, then? I am indecisive. You could if you look at the eventual impact. But during the film's run time you could easily feel a bit disengaged. So, the net result? Watch it if you have nothing better to do.

It is sad that I have to give this verdict, because in spite of the attention to detail, good cast and sincere intent, it fails in establishing a connection between the main characters and the audience. Yes, they are gray, so any empathy you feel at one point gets canceled out eventually. But that can't be a flaw, and it isn't. So, where does the film lack?

The other parameters that come to mind are lackluster production design, feeble soundtrack, and camera that is unable to break the fourth wall. I am not sure if it is any one of these or all of these. But if you watch it, do tell me by commenting below.