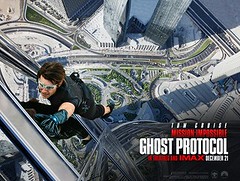 Fans who turned skeptics after M:I-3 can heave a sigh of relief. Mission:Impossible – Ghost Protocol is an engaging film that provides a jump-start to the fading franchise. Tom Cruise is back playing daredevil IMF Agent Ethan Hunt, and this time round, some much-needed originality in the action sequences make the film worth a watch. Yes, it has its moments that some people could possible find outrageously silly, but Cruise invests enough into his role to make it seem convincing. Jeremy Renner makes a fine addition to the cast. The plot keeps you hooked, the humourous undertone in the dialogue keeps things interesting and the thrills in the set-pieces make the film a good watch on the big screen.

Brian De Palma’s 1996 blockbuster, Mission: Impossible, packed in the plot. It made teenagers call their first 3.5” floppy disk a ‘NOC List’. In the new millennium, John Woo’s characteristically choreographed action set-pieces made Mission: Impossible II a cult action film. Everyone wanted to do wheelies and stoppies. In 2006, it appeared as though the franchise had run out of steam. A jaded superstar, a nowhere-near-memorable plot and action sequences that had been done to death in the previous installments made Mission: Impossible III an experience easily forgotten. Only loyalists like me would bother to watch it more than once. (Four times, at last count.)

The fourth installment of the series, Brad Bird’s Mission: Impossible - Ghost Protocol may fall way short of being a great film, but it manages to do what appeared to be an impossible mission – it infuses some much needed life and freshness into the M:I franchise. And Thomas C. Mapother IV aka Tom Cruise, who appeared to be past his prime, is back doing what he does best.

The film has a plot that isn’t too complex, but that has enough meat in it to make it interesting. Ethan Hunt and his organization, IMF, have to clear their name as they are implicated in an event that has the potential to escalate into a nuclear war. Their organization has been shut down, so their resources are limited. The electric Jeremy Renner and the beautiful Paula Patton join Tom Cruise and Simon Pegg in their mission to avert the crisis.

What instantly sets this film apart from its predecessors is the droll humour that runs through it. The first installment had no place for humour, while the next two used it only to provide a hint of comic relief. Ghost Protocol, however, has a refreshing undercurrent of dry humour that makes it an easy watch.

Then, of course, there are the set pieces. Originality once again triumphs, even as Tom Cruise bears the brunt of a generous dose of bumps and falls. Yes, they seem incredulous and impossible for the most part. But Tom Cruise breathes in every last ounce of his movie-star believability into them, making them genuinely thrilling. Undeniably, they demand dollops of suspension of disbelief, but that truly is a small price to pay for a few thrills.

What I personally liked about the film is that for the first time, characters apart from Ethan Hunt get to have a hint of a back story. So, Jeremy Renner’s Brandt has a secret that weighs heavily on his conscience, Paula Patton’s Jane wants revenge for the loss of a loved one, and laptop-loving nerd Benji, played by Simon Pegg, gets to be a field agent, something that he never thought he could be.

Jeremy Renner brings a magnetic intensity to his character. His eyes are always talking, a wonderful quality in an actor. Tom Cruise is in his element this time round, once again proving why he was once considered the biggest movie-star in the world. I love how his face and his expressions make the most preposterous sequences seem real. I also firmly believe that he is one of the most underrated ‘actors’ in film history. The rest of the cast are adequate.

I’m no fan of Hollywood, but one can’t deny that even when they make films that want to ‘make you leave your brains at home’, they do suggest that you bring them along, just in case. Mission: Impossible – Ghost Protocol is one of those films that engage you, that make you enjoy it, even if it makes you go, “Come on, now that’s just ludicrous!” once in a while.

Of course, an Indian review of this film would be incomplete without mentioning Anil Kapoor. He plays a sleazy Indian billionaire, and his portrayal of the character is quite reminiscent of his role in Race. But make no mistake, here is a man who has aged better than most. His role is laughable, but Anil Kapoor deserves kudos for starring in a big Hollywood film way before other potentials from Hindi cinema could. I was hoping against hope that once, just once, he would turn around and say, ‘Jhakaas!’

All said and done, Hollywood finds it as easy as we do to spend big bucks on cinema that is all about form with zilch content. There will be those who will feel that M:I-4 is in that same space. However, fans of the genre and M:I loyalists will definitely feel the zing that this film has, that manages to make it worth a watch on the big screen.

Want to Watch, by Jeffrey Cockrell : Finally a movie with a soul. Go watch it n see for urself!