At best, serves as an introduction to a Mumbai slum’s dire toilet situation. A rather tepid narration of a story that aims to tug at our heart and awaken a sleeping Mr. System. Succeeds at neither owing to its simplistic take.

Despite trying to address a number of strong issues from wealth inequality to rape to faith and belief the trailer has a calming texture to it. It’s a controlled, non-urgent presentation that is usually missing in trailers and films too these days. Of course, this could also become boring in a full-length film, but under Rakeysh Omprakash Mehra there is hope.

Also, I was a little surprised that Mehra’s film hasn’t had the amount of publicity that it usually does. Especially, when the topic sounds controversial, or at the very least the title attracts attention. Also, this must be the director’s first film without so-called stars. Wonder why it is being downplayed. And hope it doesn’t translate to the film.

10-12-year-olds, who can sell anything from newspapers to drugs to condoms to fake temples and mosques, make for a cute premise. That they are made to do so or their situation so demands, is a sombre yet subtle backdrop. Yet, Mere Pyare Prime Minister does not make for a compelling story or a crisp one, even at less than 105 minutes.

the story is uneven, even if the details are on point.

If one had to pick the weakest part of the film, it would be the anti-climax after all that build-up of the various trials a 10-year old, Kannu (Om Kanojiya) makes to build a toilet for his mother, Sargam (Anjali Patil). The show of poverty needs a strong stomach to watch, and to that extent, the film succeeds. You would think though that it would consistently touch the heart too. But, somehow it is at most, sporadic.

In fact, the most tender moments are not between the forced-cute mother-son or warm boy-friends or poignant-practical little-kids-government interactions. They are the romantic ones between Sargam and her admirer, Pappu (Niteesh Wadhwa). The credit to be shared equally between the sensitive writing and the performances.

Unfortunately, this can’t be said for the whole film. While there are other sparks in the details, such as inhibition-free Kannu and his friends, the over-arching story ends up being too plain. The onus then falls on Om Kanojiya and the kids to carry the film on their seemingly candid performances.

One of the film’s other win is the manner in which rape is handled. Sure, they do not expound on how the perpetrator ought to be dealt with. In fact, that aspect is almost left aside as if inconsequential. And I am divided between fuming over it and letting it go because not all films have to pin that aspect down. I tried to focus on the part that other films hardly ever touch, the victim’s psyche, how the people who care for her respond and show their concern. That bit is skipped by most movies, let alone addressed with such sensitivity. 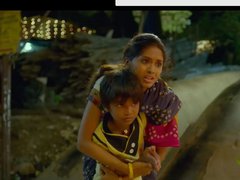 It is disappointing then that these bits that are done well do not add up to a wholesome film that reaches out to the audience. I am not even expecting it to concern itself with having an impact on the system. That cannot be expected, when the story is uneven, even if the details are on point.

Thumbs up, by Subhash K Jha, Bolly Spice : ...This is a film with many rewards for the viewers, the biggest of them being the growing realization that the have-nots are not going to go away as much as some of us would like them to. Garibi hatao is all very well. But what about the Garib? Rakeysh Mehra looks beyond both.And he sees hope.And he wants us to see it too.... full review

Thumbs up, by Raja Sen, Hindustan Times : ...Mere Pyare Prime Minister is an earnest fairy-tale, modest but far from memorable. The kids are fine and some scenes charm, but the grown-ups get the best bits. My highlight is the couple living next door to Kannu, played by Nachiket Purnapatre and Rasika Agashe.... full review

Thumbs up, by Gaurang Chauhan, Times Now : ...Overall, Mere Pyare Prime Minister is an endearing, feel-good film that will leave you with a smile on your face. Watch it.... full review

Thumbs up, by Reza Noorani, Times of India : ...Minus these small hiccups, the film is a sweet, slice-of-life drama about a kid who loves his mother and wants her life to be just a little bit better.... full review

So-So, by Madhuri V, Filmi Beat : ...While one of the earlier films- Akshay Kumar starrer Toilet: Ek Prem Katha too revolved around the theme of open defecation and sanitation, Mere Pyaare Prime Minister falls short of pushing the envelope further. Rather than a heart-touching story, the film merely ends up as a contrived, dry commentary on a social issue. Read more at: https://www.filmibeat.com/bollywood/reviews/2019/mere-pyare-prime-minister-movie-review-and-rating-anjali-patil-283792.html... full review

So-So, by Vishal Verma, Glamsham.com : ...Rakeysh Omprakash Mehra never claimed that MERE PYARE PRIME MINISTER could be the SLUMDOG MILLIONAIRE that Bollywood wanted, but it could have been the case looking at the subject it had, or it could have been the modern version of Mira Nair’s SALAAM BOMBAY! Or a tribute to 1981 CHAKRA that starred the ever haunting Smita Patil, but that’s not the case. Still, it has its heart at the right place and is an endearingly relevant letter to the Prime Minister. Rakeysh Omprakash Mehra’s Mann Ki Baat has a heart.... full review

So-So, by Anita Iyer, Khaleej Times : ...We cannot deny that the theme needs urgent attention as open defecation poses a grave danger for females, who are at risk of sexual violence. The only drawback of the film is that we have seen it before and it lacks novelty.... full review

So-So, by Umesh Punwani, koimoi : ...All said and done, Mere Pyare Prime Minister is a sweet film with a social message but fails to create an emotional connect. The story is a drag and this could easily have been a short film.... full review

Thumbs down, by Johnson Thomas, Free Press Journal : ...It might seem heroic that young kids are making strident efforts in bringing about change in the social landscape but when it’s told in dry, almost relentless monotony, it all seems rather fruitless. Even Om Kanojia’s enthusiasm and Anjali Patil’s restraint don’t make this film a worthy cause!... full review

Thumbs down, by Shubhra Gupta, indian express : ...But the attempt at balancing the serious with the jokey sits uneasy. And there’s no getting away from the all-hail-the-PM rah-rah-ness: a return letter from his high office conjures up willing officials and, yes, a place where you can go when you have to. Clearly, the medium has been harnessed for the message.... full review

Thumbs down, by Mayank Shekhar, MiD DAY : ...He shares a lovely bond with his single mother (Anjali Patil). He writes a letter to the PM hoping for a public toilet in his slum. That the right to shit in peace must involve a petition to the PM, no less, is tragic enough. That you don't feel for anyone in this film (let alone, the issue), with the camera hovering around a bunch of parallel songs/story-lines, aimed to extend a simple short film into a full-length feature, is perhaps worse.... full review

Thumbs down, by Kunal Guha, Mumbai Mirror : ...Mere Pyare Prime Minister is packed with sequences featuring minors taking a dump in various outdoor locations while plans fly past in the distant horizon — a possible hat-tip to Danny Boyle. But this desperate and deliberate contrast-of-sorts has been so abundantly used in films post Slumdog Millionair, it lacks the necessary impact.... full review

Thumbs down, by Nandini Ramnath, Scroll.in : ...The Delhi sojourn also takes the movie out of the unremitting squalor that characterises Mumbai, and it can only be described as a relief. There are only so many references to bowel movements and conversations about a necessary part of human existence that viewers can take.... full review