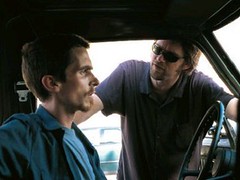 If you’ve been up all night, you know the crazy things insomnia can make a person do. At several points during The Machinist, you will promise yourself never to deliberately stay up and let your demons take over. Christian Bale’s underweight, sleep-deprived look is so disturbing, it compels you to sit through the movie to figure out what happens. Watch the film for a good old dose of wide-eyes-shock-revelation-relief.

It’s scary when you’ve seen a fit and bordering-chubby actor in films like American Psychoand Nolan’s BatmanSeries turn into a frail, 6’3 - 110 pounds man for a character. Apart from the sincerity and dedication, Christian Bale’s look in The Machinistjust creeps you out. In the film, he plays a man who hasn’t slept in a year and hence loses copious amounts of weight, and everytime you see his ribcage or protruding spine you just want to leap into the screen, feed him some food and sing him a lullaby to sleep.

The Machinistis a thriller alright. Trevor Reznik works as a machinist, a fairly laborious job which should want him to have a good night’s sleep. Yet his insomnia brings him to a nightmarish state, where he repeatedly has flashback visions, everything around him is woozy and uncontrollable.

He believes a co-worker who doesn’t exist is harassing him, he gets sucked into a warped game of hangman, which haunts him at several points, and he finds solace in 2 women with dual personalities - a sex-worker who becomes his confidante and a dedicated mother and a waitress, who allows him to escape his world through their conversations.

Both women overlap each other, yet they stand apart bringing to the table different emotions for him to explore.

The concoctions used in The Machinistare the standard ones. A troubled protagonist, undergoing physical and psychological trauma that leads to furthering of the plot, a dark, largely black/white tone of the film and an ascending Hitchcock-esque wailing piano background music. You know his lack of sleep is making Reznik see things, yet you want to know if someone is conspiring against him, as he believes. You will find yourself arguing that all of this could be a hallucination, but you don’t want to seem presumptuous – hence you sit with your bitten nails waiting to see what finally happens.

Although no ground-breaking secrets are revealed at the end of the film – it’s actually a very typical climax for it’s genre - you still make that journey as a viewer with the film where you feel like the story has met it’s end. You know because Reznik has found his closure, you can sit back and feel the same. The Machinistis one of those few films where you get attached to character not because you particularly like him, or because you are sympathetic of him – it’s just a brilliant job of characterization. You immediately feel drawn to his story.

The DVD has an audio commentary from the director Brad Anderson, which helps deconstruct the film and is much better than having a rambling account of the shoot and set. The only problem is, he spoils the endings of films like Fight Club andThe Sixth Sense, so if you haven’t seen those, skip the commentary. There are also a few deleted scenes and theatrical trailers in the special features section, which is intriguing – they reveal that the film is shot in Spain.

Bale’s look in the film would qualify as the creepiest aspect, among other things in the film. You’d be interested in knowing that 3 months after the shoot of this film, he shot for Batman Begins. The Machinistis out and out a Christian Bale film; it’s about his character, his look and the creepy stuff that happens to you if you don’t sleep. Take your mother’s advice, go to sleep before someone makes a movie about your insomnia.