After seeing the teaser of Lokmanya - Ek Yugpurush way back in 2012, I had doubted the film's intentions in the first place. My biggest worry was that it might end up becoming just another biopic that is high on so-called patriotic statements or the ones that question our socio-political culture. As the film begins, Nana Patekar's sarcastic voiceover (compelling, still to some extent questionable) appears to be following the latter track. This theatrical commentary continues until the intriguing showmanship unravels.

A biopic on an illustrious personality faces its primary hurdle right in it's story. For people familiar with that individual, there are barely any surprises. And someone unfamiliar might feel alienated from the drama. So the real challenge of such a biopic is to appease people from both worlds. This is what Lokmanya - Ek Yugpurush uses to its advantage so masterfully that it seems the history is being replayed right in front of your eyes. No matter which world you are from, you stay gripped to that golden era throughout.

If history is all you are getting to see in a film, what's the point of going to theatres? I mean, information is always a few clicks away. This is another challenge Lokmanya - Ek Yugpurush braves, all thanks to its approach to storytelling. Bal Gangadhar Tilak, fondly called as Lokmanya, played a significant role in India's freedom fight with the British. Instead of directly bombarding you with the history, director Om Raut makes you witness his struggles through the eyes of a journalist (Chinmay Mandlekar). Not only does this film succeed in depicting the magnitude of Lokmanya Tilak and his achievements, it also effectively comments on our ignorance towards his visionary ideas. 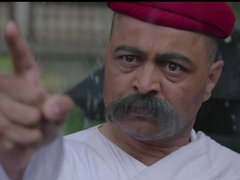 Make no mistake, this film is absolutely no great piece of writing. With all due respect to its production values, this film is not even half dazzling without Subodh Bhave. I doubt if anyone (not even Raut himself) can imagine this extravaganza without him. Yes, some of the dialogues are splendid. But who is bringing them to life? Bhave has proven his mettle time and again. But this occasion, he takes his craft to another level.

Direction, on the other hand, lacks persistence and meticulousness. Some of the sequences are needlessly glorified. Several key elements surely help disguise a few casual moments (read mistakes). But no blunder comes close to the choice as well as the quality of visual effects. Some galaxy-like effects at the Mandalay Prison make the whole effort look stupid. I don't know if the director wanted to give a divine feel to Tilak's character. However, his character itself is so powerful that the rest of the glorification appears irrelevant.

Raut forcibly spoon-feeds you almost everything. His eagerness to give away an outdated (still popularly overused) conclusion, questions viewers' sensibilities. Had he let audiences perceive the film's takeaway, it would have had more impact.

Yet, despite all the downsides, Lokmanya - Ek Yugpurush leaves you with a gratifying experience.